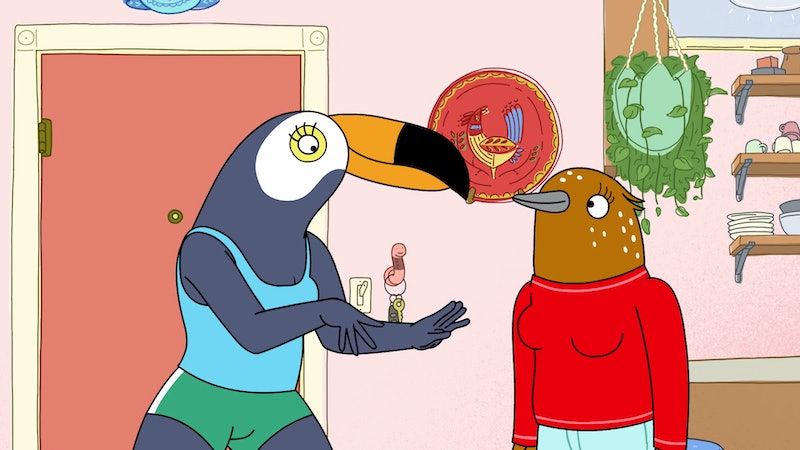 Another Netflix show gone too soon. On July 24, it was announced that Netflix canceled Tuca & Bertie, the animated series starring Ali Wong and Tiffany Haddish as bird besties. “[Creator] Lisa Hanawalt created a relatable yet whimsical world in Tuca & Bertie,” a Netflix rep said in a statement following the cancelation, per Vulture. For that very reason, fans on Twitter were sad to hear the critically acclaimed Tuca & Bertie wasn't getting a Season 2, but Hanawalt hopes that Tuca & Bertie can be saved by another network.

Hanawalt's also proud of how many fans connected with her weird little bird-centric show that dealt with #MeToo, anxiety, and female friendship. "Best of all," Hanawalt tweeted, "I still get daily messages and tweets from viewers who connect personally to the characters and stories. The birdsona & plantsona fan art is SO incredible, are you kidding me! And the show is still being discovered by new fans every day!!"

It's why Hanawalt hopes Tuca & Bertie isn't really over yet. In her last message regarding the cancelation, Hanawalt thanks fans for all their love and support. "To everyone who was comforted and felt like this show gave you a voice," she added. "I’m hopeful we can find a home for Tuca & Bertie to continue their adventures."

As of right now, there has been no word on any other networks picking Tuca & Bertie up for a second season. But, fans already have ideas on where the show could go next. "Internet, it’s time for you to step up!" one fan tweeted. "@ComedyCentral or @hulu or @PrimeVideo, ball’s in your court! Someone please save #TucaAndBertie!"

Another person on Twitter wrote, "I really really hope they will find a home soon. Such a wonderful, funny and touching show deserves a home that can be as supportive and strong as it deserves!! COME ON NETWORKS!!!"

The fact that Tuca & Bertie felt like something new was one of the reasons fans were so sad to see it go. As one fan pointed out, adult animation tends to feel male-centric, but Tuca & Bertie was unapologetically female. "Tuca & Bertie's opening sequence had a building made out of bouncing boobs!" user @ItsBrianaWhite tweeted. "It was magical as a female to see our perspective uncensored."

Others agreed. "Not for nothing," Variety's TV writer Caroline Framke tweeted. "Tuca & Bertie is a show about thirtysomething (bird)women that takes their friendship/anxieties/faults/traumas seriously, created and produced by women with a heavily non-white cast. Woulda been nice to keep it!"

Hopefully, another network will agree and give fans another season of Tuca & Bertie. But, if not, it's clear that though Tuca & Bertie might be gone, it won't be forgotten anytime soon.