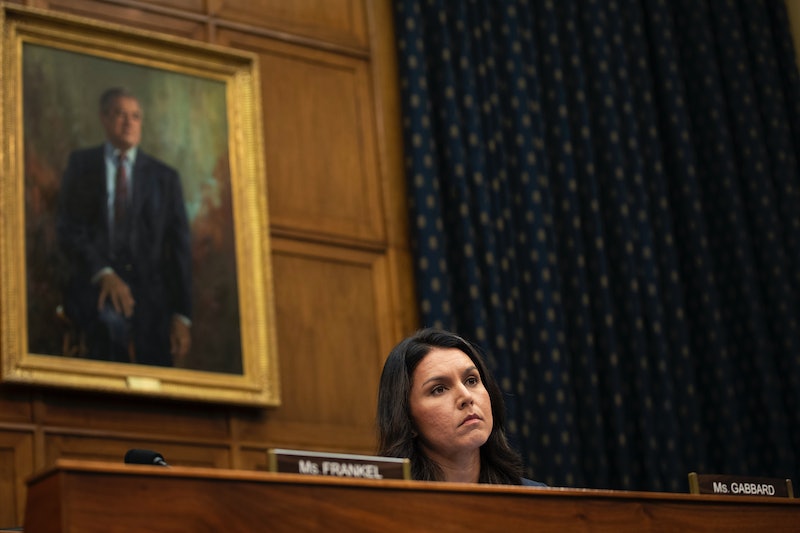 Since announcing her 2020 presidential campaign, Hawaii's congresswoman has found herself under an increasingly intense national microscope. As her past takes heavy scrutiny, the representative has even offered up apologies for some of her more controversial statements, work, and decisions. But Rep. Tulsi Gabbard doesn't regret meeting Syrian President Bashar al-Assad. In an interview on CNN, the Democratic presidential candidate said such meetings are necessary for the pursuit of peace.

"It continues to be very important for any leader in this country to be willing to meet with others, whether they be friends, or adversaries, or potential adversaries if we are serious about the pursuit of peace and securing our country," Gabbard said Sunday during an interview on CNN's State of the Union. When asked if she regretted having met with Assad in 2017, Gabbard said simply, "no."

In January 2017, Gabbard announced she'd met with Assad while on what her office called a "fact-finding" mission in Syria, the Guardian reported. According to the State Department, the United States largely suspended relations with Syria in 2012. What's more, U.S. officials have called Assad "a monster" and "a war criminal," alleging that his regime has been behind chemical attacks and "other atrocities against its own people."

In April 2017, Gabbard said she was "skeptical" of evidence alleging Assad was behind chemical weapons attacks. "Yes, I'm skeptical because we have to take at a premium the cost of these wars not only on the Syrian people and the people in the Middle East, but the cost of these wars here in the United States," she told Wolf Blitzer. Gabbard went on to say she felt "regime-change wars" were "counter productive" and "seen to often" to be failures.

When criticized for her comments, Gabbard accused her critics of being hypocritical. "Those who've declared Trump a habitual liar now vilify those refusing to blindly follow him into another regime change war," she tweeted in 2017. "Hypocrisy."

On Sunday, Gabbard told CNN's Jake Tapper that, as a legislator who is also a veteran, her peace-building efforts are motivated from having seen first hand the cost of war. "You know, Jake, you often acknowledge and bring to the forefront the cost of war, and our troops, and who pays the price," she said. "As a veteran — you know I have been serving in the Army National Guard now for 15 years and continue to serve — [who] served on two Middle East deployments, I have seen this cost of war firsthand, which is why I fight so hard for peace."

Sunday, however, wasn't the first time Gabbard has told CNN that she has no regrets about her meeting with Assad. "Whatever you think about President Assad, the fact is that he is the President of Syria," the congresswoman said in an interview with the cable news network back in 2017. "In order for any peace agreement, in order for any possibility of a viable peace agreement to occur there has to be a conversation with him."

Since announcing her 2020 campaign, Gabbard has also received heavy criticism for her past rhetoric on homosexuality and work for an anti-gay organization. She has since apologized and blamed her conservative upbringing.