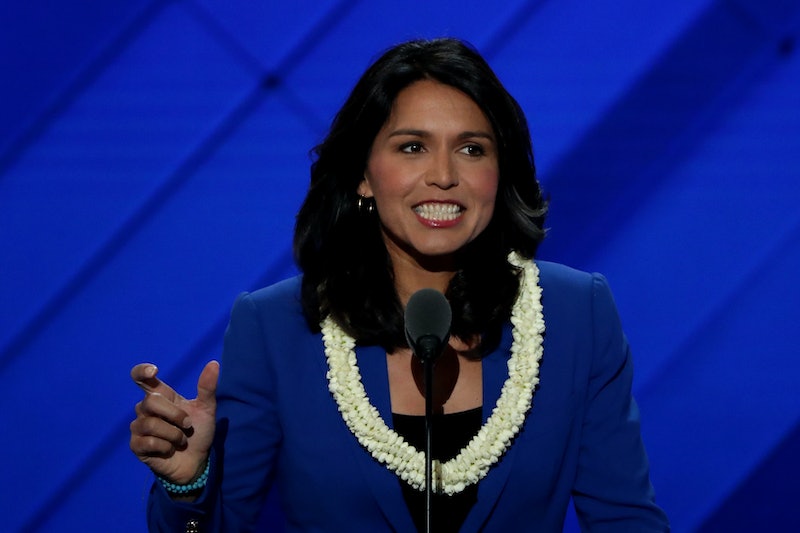 After announcing her bid for 2020 in an interview with CNN's Van Jones on Friday, a reporter at the network covered Rep. Tulsi Gabbard's past opposition to equal rights for LGBTQ Americans. Then, after the story was published, Gabbard responded to criticism of her anti-LGBTQ past for the first time since launching her campaign.

CNN reported on Gabbard's views in the early 2000s, when she was first running for office and was participating in anti-gay activism. Her dad, at the time, ran the The Alliance for Traditional Marriage, which worked to pass Hawaii's constitutional amendment banning same-sex marriage.

Gabbard herself spoke at a hearing on civil unions in Hawaii in 2004, opposing them because of their similarity to marriage. "As Democrats we should be representing the views of the people, not a small number of homosexual extremists," Gabbard said in the hearing.

After this resurfaced over the weekend, Gabbard issued a statement to CNN:

First, let me say I regret the positions I took in the past, and the things I said. I'm grateful for those in the LGBTQ+ community who have shared their aloha with me throughout my personal journey.

She continued to detail her work in Congress that has benefited LGBTQ Americans, including her support for the Equality Act, repeal of the Defense of Marriage Act, and more. "Much work remains to ensure equality and civil rights protections for LGBTQ+ Americans and if elected President, I will continue to fight for equal rights for all," Gabbard concluded.

This is not the first time that Gabbard has addressed her evolution on LGBTQ rights. She first apologized when she ran for Congress in 2012. "I want to apologize for statements that I have made in the past that have been very divisive and even disrespectful to those within the LGBT community. I know that those comments have been hurtful and I sincerely offer my apology to you and hope that you will accept it," Gabbard said at the time.

She was just 21 when she won a seat in the Hawaii legislature; she is now 37. CNN reported that last December, while speaking in New Hampshire, Gabbard addressed why she once held different views. "I grew up in a very kind of conservative household," Gabbard said explaining that she lived in a "multi-ethnic, multi-racial, multi-faith home" as a kid that had equally diverse views. "I held views growing up that I no longer hold."

During the same speech, Gabbard also acknowledged that her time serving in the National Guard affected her evolution. She said that the ideals she saw there of "freedom and liberty" mean "that our laws, our government must apply that respect for every single individual."

She went on detail what that "respect" means. "For people who choose to love or marry someone — whether they be of the same gender or not, that respect, and that freedom for every woman to be able to make her own choice about her body and her family and her future," Gabbard continued. "So it was a process that I went through that changed my views in many ways and in many big ways to the views that I hold today."

Gabbard is one of the first Democrats to announce she is running in 2020 in what is expected to be a very crowded field. Her past views on LGBTQ could likely come up again before the nomination is set.