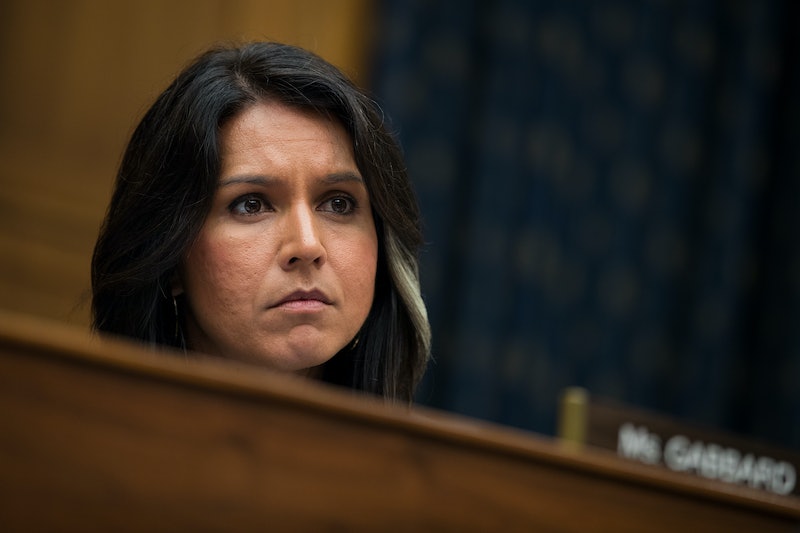 After a candidate announces their intention to run for president, the public often immediately digs up and scrutinizes their past views. On Sunday, that meant Hawaii Rep. Tulsi Gabbard had to explain her past anti-LGBTQ statements and beliefs yet again. And this time, she said they've simply changed over time. "I was raised in a socially conservative household with views and beliefs and things that I no longer hold today," Gabbard told CNN anchor Jake Tapper on State of the Union.

Gabbard said her "views have evolved" and that is shown in her legislative record. "Like most of the country, my views have evolved, to the point where now you can look to my record over the last six years in Congress that reflect what's in my heart and my commitment to fighting for equality, my commitment to fighting for LGBT rights," she told Tapper. "I have a 100 percent legislative voting record with the Human Rights Campaign. I'm a member of the Equality Caucus, and, again, look forward to continuing to recognize the work that still must be done towards equality and working to make that change happen."

In a video statement posted on YouTube on Thursday, Gabbard elaborated on her apology. "In my past, I said and believed things that were wrong, and worse, they were very hurtful to people in the LGBTQ community and to their loved ones. Many years ago, I apologized for my words and more importantly for the negative impact that they had. I sincerely repeat my apology today," Gabbard said in the video. "I'm deeply sorry for having said them. My views have changed significantly since then."

Her appearance on Tapper's State of the Union was the second time Gabbard had recently apologized for her past anti-LGTBQ views, after posting the YouTube video. The video was spurred by a report from CNN on Jan. 13.

On Wednesday, BuzzFeed News reported that Gabbard's team had started reaching out to LGBTQ groups with varying degrees of success. Nate Monson — the executive director at Safe Schools Iowa, a LGBTQ youth advocacy group — said Gabbard's actions need to reflect a change of heart. Iowa is an important early state in the presidential primary and caucus race. "A statement is nothing, her actions need to show this," Monson told BuzzFeed News. "It's a serious redemption tour, and frankly she should probably withhold running for president until she's done that."

As far as actions, Gabbard's congressional rating with the Human Rights Campaign has been steadily climbing for three years. She received a 100 rating during the 115th Congress. Gabbard was also one of 212 congress members who filed an amicus brief supporting Edie Windsor's challenge before the Supreme Court to strike down the Defense of Marriage Act.