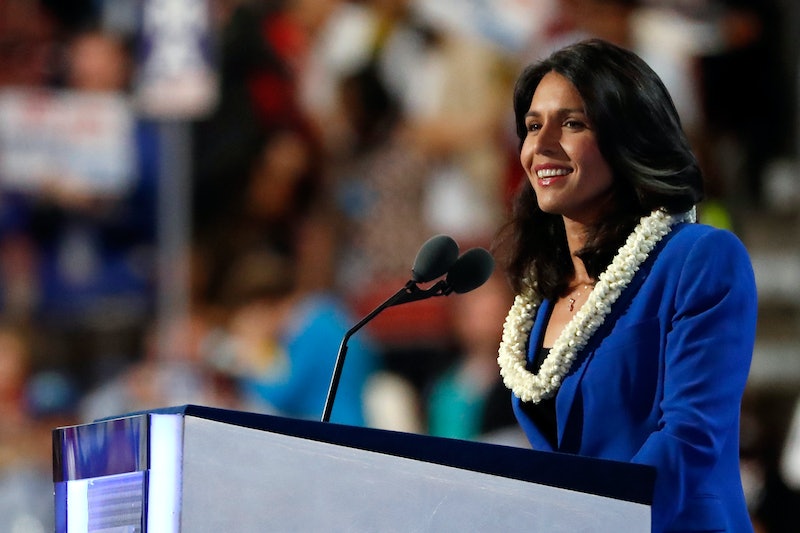 On Friday, Hawaii Rep. Tulsi Gabbard officially announced that she is running for president in 2020, joining what is likely to become a crowded field of Democrats who want to defeat President Donald Trump. Although she has been called a progressive "rising star" in the Democratic Party, Gabbard's comments about LGBTQ people and marriage equality have recently resurfaced and come under scrutiny. Bustle has reached out to Gabbard for comment.

Earlier in Gabbard's career, Jacobin reported that she was anti-choice and in favor of a constitutional amendment that defined marriage as between a man and a woman. She also argued that Democrats "should be representing the views of the people, not a small number of homosexual extremists," per Jacobin.

According to The New Yorker, Gabbard also opposed a bill that aimed to legalize civil unions for same-sex couples, and argued against a resolution to combat anti-gay bullying in Hawaii's public schools. It was only later that Gabbard acknowledged that her position had changed. In a post published in December 2011, Gabbard wrote that her two tours of duty in the Middle East compelled her to advocate for reproductive freedom and marriage equality.

"I began to realize that the positions I had held previously regarding the issues of choice and gay marriage were rooted in the same premise held by those in power in the oppressive Middle East regimes I saw — that it is government's role to define and enforce our personal morality," Gabbard wrote.

This shift in her views, however, was not enough to earn her an endorsement from Hawaii's LGBT Caucus. According to Maui Time Weekly, the caucus did not endorse Gabbard in her 2016 Congressional race, arguing that Gabbard still personally opposed same-sex marriage even if she abstained from taking political action on it. The caucus cited a 2015 interview that Gabbard had done with Ozy, in which she stated that she did not want to emulate a theocratic government “imposing its will” on its people.

"She tells me that, no, her personal views haven’t changed, but she doesn’t figure it’s her job to do as the Iraqis did and force her own beliefs on others," Ozy's Sanjena Sathian and Tom Gorman wrote.

In response, Gabbard's office told Maui Time Weekly in a 2016 statement that she "has been a strong voice on LGBT issues and that is reflected in her voting record, which was scored at 100 percent." The statement also highlighted numerous pieces of legislation that Gabbard has co-sponsored to protect the rights of LGBTQ people, such as the Repeal of the Defense of Marriage Act and the Military Spouses Equal Treatment Act.

Gabbard started her political career as a Democrat in her early 20s, The New Yorker reported, while her father Mike was a Republican who routinely protested what he described as “the radical homosexual agenda.” Although Gabbard and her father held elected office for two different political parties, they nonetheless founded multiple nonprofit organizations together, and Gabbard supported her fair share of conservative policies.

Now, however, Gabbard is perceived as a "rising star" in the Democratic party, according to The New York Times. She has received Vermont Sen. Bernie Sanders' support in the past, and was endorsed by Planned Parenthood and the AFL-CIO ahead of the 2018 midterm elections. Her previously stated views on issues like abortion, marriage equality, and equal protections for LGBTQ people, however, are likely to receive increased scrutiny as more Democrats join the field to replace Trump.