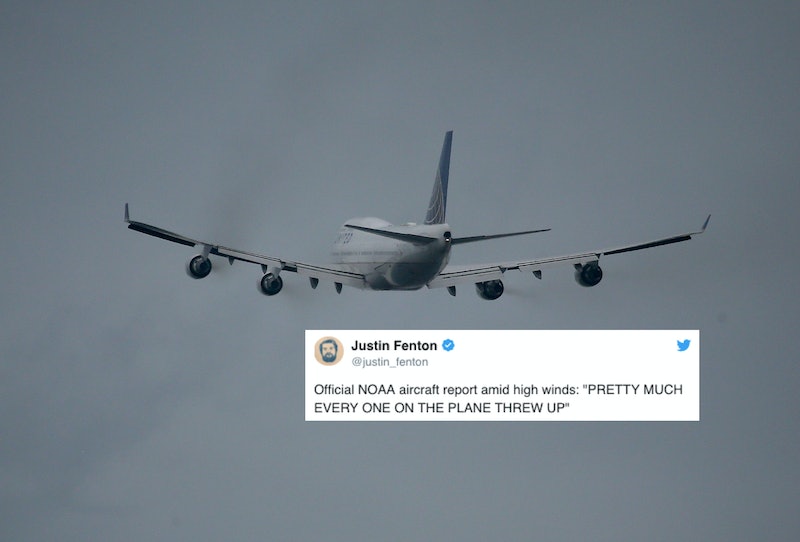 What's worse than throwing up on an airplane? How about almost everyone throwing up. That's exactly what happened on Mar. 2, when turbulence during the nor'easter that slammed the east coast was so bad, that "pretty much" every passenger on a flight vomited. A United Airlines captain filed a pilot report that was posted to Twitter, and it revealed every passenger's worst nightmare — mass vomiting. "Very bumpy on descent," the official report stated. "Pretty much everyone on the plane threw up. Pilots were on the verge of throwing up." The late winter nor'easter was responsible for the scene reminiscent of the movie Stand By Me where mass vomiting ensued at a pie eating contest.

Turns out, once a few people throw up, the smell usually prompts others to toss their cookies too. The storm, which clocked winds as high as 93 mph in Massachusetts, according to ABC News, pummeled the East Coast from Maine to Georgia, and grounded more than 4,000 flights — but not before a flight from Charlottesville, Virginia, to Philadelphia, Penn., was diverted to Washington, D.C., due to high winds. The bumpy flight created a scene that can only be described as a horror show. And, according to people on Twitter, that's not the only flight that was subjected to mass vomiting.

Hey, At Least They Were All In it Together

While airplanes provide airsickness bags that most people end up throwing their trash in, actually using those bags to throw up seems pretty rare. Of more than a hundred flights I've been on, I have only ever witnessed vomiting twice. Unfortunately, I was sitting near the vomiter both times. But I was able to keep my free peanuts down because I hate vomiting so much that I will do almost anything to prevent it from happening.

Next Up: The Clean Up

The maintenance crew tasked with cleaning up this mess definitely deserves hazard pay.

Seriously, I Can't Even

This is probably the only time in the history of the world that an airplane ran out of airsickness bags.

Because, I can think of few things more horrific than mass vomiting.

And, Vomit Is Contagious AF

Is it the smell? The retching? FOMO? According to Go Ask Alice on the Columbia University website, the vomit chain reaction might be your body's way of keeping you safe. "It may be that people who were easily affected by someone else’s sickness were more likely to survive because such a response would result in releasing a harmful substance more quickly." Basically, when someone else throws up, your body thinks it might have ingested something harmful, and it tries to expel it as quickly as possible. While this was a great survival tactic in the olden days, it's much less appealing while trapped in a steel tube with strangers.

Let's Just Throw The Plane Away

No one is ever going to want to board the vomit plane again. Just take her to the airplane graveyard, say a few kind words, and be done with it.

Morale Is Low & The Stench Is Strong

The smell of upchuck is notoriously hard to get rid of. And, these poor vomit-covered passengers were put on a bus to their final destination where the smell only intensified.

This Guy Is Keeping It Real AF

Twitter user @Kilkenny posted a blow-by-blow of the journey, which included closed bridges and hungry passengers (because, they vomited all of their food) attempting to divert the bus to Arby's. When all was said and done Kenny, whose flight came from London, spent seven hours on a plane and nine hours on a bus surrounded by the stench of vomit. Please send these people your good thoughts and healing vibes so they can recover from this nightmare and get on with their lives. Though, it's definitely an experience — not to mention a smell — they'll never forget.