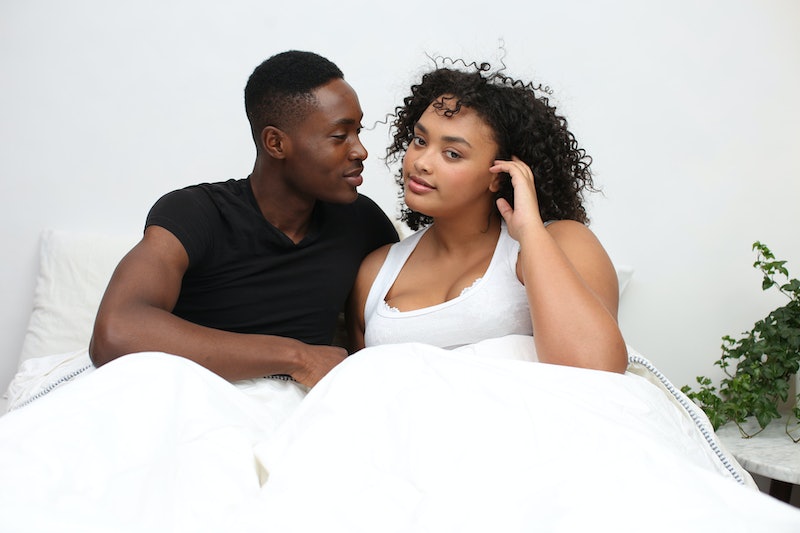 Talking about sex can be tricky in a relationship, but get even more complicated when one of you is more interested in sex than the other. It's nothing to be ashamed of — there's no "normal" sex drive to have and there's nothing wrong with wanting or not wanting sex on any given day. But new research from the Journal of Social and Personal Relationships shows that the way you turn down sex can be key to keeping your relationship happy.

Looking at two surveys of 642 adults, researchers wanted to see what happened in relationships where one partner had more sexual desire than the other. So they looked at the ways the partner who did not want to have sex responded to advances. The partner would either have sex for "avoidance goals" — like not wanting to hurt their partner's feelings — or reject sex, but the rejection could be done in a negative or a positive way. There was cold, critical rejection or a more empathetic, reassuring rejection.

"We were somewhat surprised to find that the effects did not differ much based on gender," James Kin, one of the study authors, tells Bustle. "In other words, rejecting a partner in reassuring ways appeared to buffer partners against declines in relationship quality compared to engaging in sex for avoidance goals (like to avoid upsetting their partner or avoid conflict), and this was true regardless of whether it was men or women who were rejected by their partners."

And it makes sense. Talking about sex is crucial to a relationship — even if that means things get a little awkward. "Often people can have sex but are scared to talk about it out of fear that might offend their partner or it might be awkward," sexologist and relationship expert Dr. Nikki Goldstein tells Bustle. "In order to have a healthy sex life you need to have sometimes awkward conversations about what might not be working in the bedroom or what you want more or less of." And sometimes that just means being honest about the fact that you're not in the mood. If you keep having sex even though you don't really want to, that's bound to eventually wear at the relationship.

How To Talk To Your Partner

It's key that when one of you turns down sex that you do it in a compassionate, positive way. Keep your partner's feeling in mind if you're telling that you don't want to have sex — and reassure them that you still do care about them. The more you talk about it, the more you may be able to find a happy medium.

There are so many reasons why you might not be interested in sex any given day. It may be hormones, it may be your mood, or it may be outside stress that has nothing to do with your relationship. Things like work stress can be a huge sex drive killer. "Stress at work can decrease sex drive because stress sends out cortisol into our [bodies], which is a hormone that can suppress sex hormones," Kelly Connell, sexuality educator and counselor and sex educator at Naughty North.ca, tells Bustle. "Also, in times of high stress, we go into a fight-or-flight response and tend to think about survival. The pressure of work, the need to pay bills, and the fear of losing a job often moves sex to the back burner." If you explain to your partner that you care about them but have other things affecting your desire levels, they're less likely to take it personally.

And if you have mismatched sex drives, it's important that you have a larger talk about how you'll deal with that. “The couple needs to be open about what each of their drives and needs are, and then they can talk about it and find a happy medium where both feel OK about the amount of sex that they are having,” psychologist Dr. Nikki Martinez, Psy.D., LPCC tells Bustle. “They also might agree to supplement the actual act of sex with other acts to take care of the partner’s needs.”

It can feel uncomfortable talking about not wanting to have sex, especially if you're worried about hurting your partner's feelings. But as the research shows, talking it through is better than just trying to ignore the problem. There's nothing wrong with not wanting to have sex, it's just important to keep your partner's feelings in mind when you tell them you're not in the mood.