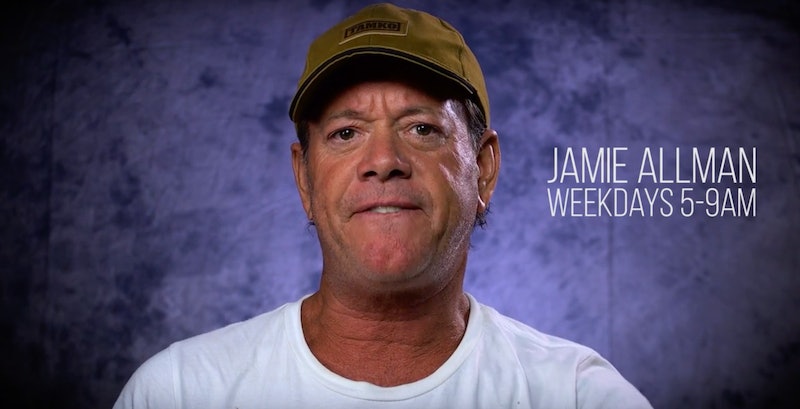 A local TV host in St. Louis is out of a job after attacking one of the survivors-turned-activists of the Parkland, Florida, shooting. Sinclair Broadcasting pundit Jamie Allman's comments on David Hogg created a controversy that led to Allman resigning from his job at the TV station. The conservative host had threatened to sexually assault Hogg with a "hot poker" on Twitter.

Allman previously hosted a nightly news show on the St. Louis ABC affiliate KDNL, which is owned by Sinclair. In late March, he posted to Twitter an offensive comment about the high school student. "I've been hanging out getting ready to ram a hot poker up David Hogg's ass tomorrow. Busy working. Preparing," Allman reportedly posted to Twitter with no context. His account has since been locked.

Riverfront Times, an alternative St. Louis weekly, initially reported on the comment, and it was then covered by the St. Louis Post-Dispatch, leading to a boycott by a number of St. Louis businesses. That led to Allman's show being off the air on Monday night.

By early Tuesday, it was reported by the Washington Post that Allman had resigned. Ronn Torossian, a PR executive who is acting as a Sinclair spokesman, told the paper, "We have accepted Mr. Allman’s resignation, and his show has been canceled."

Allman also hosts a conservative news show on KFTK 97.1 FM in St. Louis in the morning. On Tuesday a substitute host said Allman was taking some time off, the Washington Post reported.

An area politician, Democrat state Rep. Stacey Newman from Richmond Heights, brought attention to the comment on Twitter and pushed for advertisers to pull their money from his show. "These STL companies are complicit by advertising on #JamieAllman@971FMTalk," Newman posted with a list of advertisers, many of whom promptly responded on Twitter and promised to withdraw their funds.

The Twitter comments were not the first example of Allman going after Hogg. According to the Washington Post, Allman recently calling Hogg a “big complainer,” because of his view on carrying clear backpacks.

He also criticized Hogg for trying to "have it both ways." Allman said the student needed to choose whether he's a kid or a revolutionary. "You can't sit there and say, 'Murder, murderer, murderer!' 'Wait, no we're not.' 'Hey, leave me alone, I'm just a kid.'"

Allman has a past of controversial statements that drew the attention of Media Matters for America. In October, the progressive media watchdog ran a piece entitled, "St. Louis' Sinclair station replaced local news with unhinged conspiracy theories from a wannabe Sean Hannity." Media Matters said that the local TV station had replaced local news with Allman's rants. The channel moved to "push right-wing talking points on unsuspecting local news audiences whenever possible," the watchdog group said.

Furthermore Media Matters claimed that he used "offensive rhetoric targeted specifically at women, people of color, and immigrants on air and in social media."

He even threatened Republicans who didn't attend a Trump visit to the area last fall. He said, "We’re taking your name," and insinuated that he would "keep an eye" on any who didn't show up.

But the attacks on Hogg reached a new level, and it's St. Louis-area businesses' boycott that got him off the air.