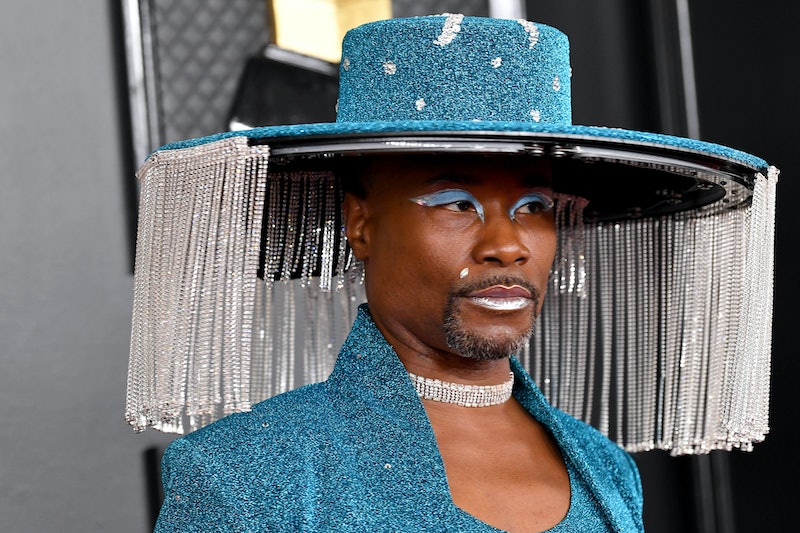 He may have not been carried in on a gilded platform like at the 2019 Met Gala, but according to Twitter, Billy Porter's Grammy Awards red carpet look — particularly his mechanically fringed wide-brim hat — is worthy of all the praise. When he stepped out in the custom teal, bejeweled number from Baja East, he turned heads and lifted spirits at the same time. And Twitter, as per usual, had a lot to say about it.

Like magic, the silver fringe face mask opened and closed as he walked down the red carpet. His stylist Sam Ratelle, aka the magician behind it all, told E! News that he was actually in charge of a remote control for it the whole night. He trailed Porter down the carpet, and whenever he was given the signal from the Pose star, Ratelle opened the gates with a click. The design idea — assisted by Scott Studenberg, per Vanity Fair — was inspired by none other than Grammy-winning artist Billie Eilish.

“Billy and Billie Eillish had a beautiful moment on the red carpet at the [American Music Awards] where they both gushed over each other's hats," Ratelle told Vanity Fair. "Billie was wearing a Victorian inspired beekeeper bonnet with netting covering her face. After the event, Billy jokingly told me he loved her look but after 30 years of working his way to Hollywood, ‘y'all are gonna see my face!’” That's how the motorized bit came into play.

“This design is a great compromise. It's a reveal,” Porter added. “The crystal curtain stays open, unless you get on my nerves and then I can shut you right out!” There's no doubt that he took full advantage of that privilege. Who wouldn't?

Twitter Thought It Would Be Good For Social Outings, Too

Others Just Appreciated The *Drama*

Somehow, the fashion icon continues to outdo himself with each red carpet appearance. And no one is mad about it. “It’s so fun to design for Billy because I’m able to push fashion as far as I can dream and he is here for all of it,” Studenberg told Vanity Fair. “I mean, it’s like Elton John and Selena had a baby, riding a Clydesdale playing peekaboo. But Billy acts like he’s just taking a casual stroll through Whole Foods.“