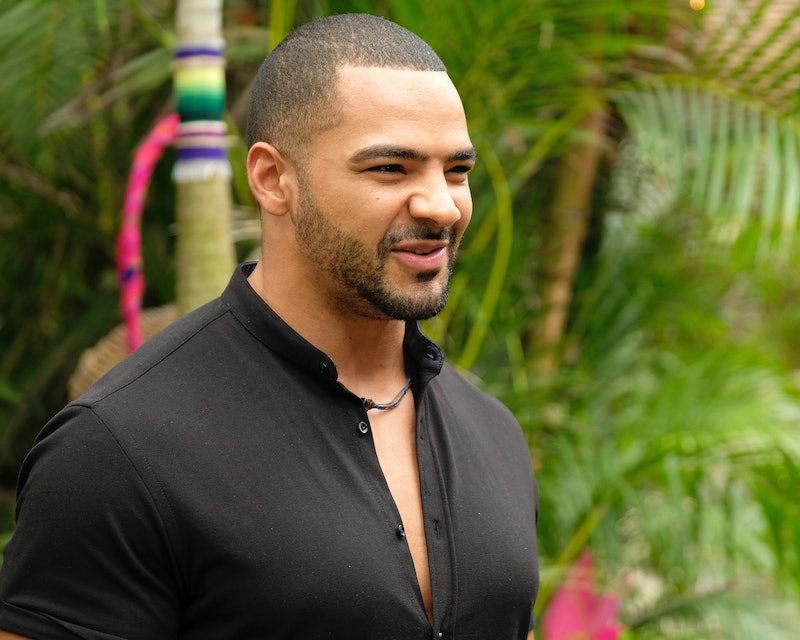 Clay may have been appointed Bachelor in Paradise's sweet and cuddly teddy bear, but this week the former football player painted himself in a not-so-endearing light after he divulged the real reason he ultimately decided to break up with Angela earlier this year and it's... not great. In fact, Clay's remark about Angela not being ambitious enough for him because all she wanted was to be a "wife" and "mother" definitely hit a nerve in the BiP fanbase, causing many viewers to take to Twitter to defend Angela and stand up for her character.

“I wanted so bad for [our relationship] to work, but I just don’t think I was as far along as you were,” Clay said during his brief chat with Angela prior to Tuesday night's rose ceremony. “I just felt like our goals and ambitions aren’t parallel.” For him, one of those goals was apparently her lack of interest in going to the gym with him on a regular basis. “Clay, you go to the gym for four hours,” Angela retorted, which is honestly a pretty justifiable response. One hour at the gym feels taxing and now you're gonna quadruple that time frame? No thanks!

But then Clay proceeded to dig himself an even bigger hole by stating that he wants more in a life partner than someone who just wants to be a "wife and a mother." He didn't like the idea of being the main breadwinner in the family and felt he should be with someone who was more ambitious. Needless to say, those remarks did not go over well with many fans...

"An unemployed dude who goes to the gym for four hours a day telling an ex-girlfriend that wanting to be a 'wife and mother' isn't ambitious enough for him sums up BEING A WOMAN IN A NUTSHELL," Entertainment Weekly's Kristen Baldwin tweeted on Tuesday evening. And countless other women echoed that sentiment, remarking at the incredibly unfair double standard at play here.

Clay may have realized how some of his comments were coming across and tried to subtly walk back what he was saying, assuring Angela that he thought she was a strong and independent woman. But the damage had already been done.

Some fans were particularly curious about what Nicole would have to say about all this, wondering if she was aware that he felt this way.

Others couldn't move past the gym aspect of the equation and had a difficult time believing something like that could've played such a big role in a couple's breakup.

Clay may not have intended for his remarks to come across the way they did — having private conversations be filmed for national TV is bound to be nerve-wracking — but it definitely rubbed some people the wrong way nonetheless.

Let's just hope that both Clay and Angela can now finally move on and find happiness elsewhere rather than being forced to relive their complicated past. Then at least maybe this brutal conversation would've been worth the effort.

More like this
Twitter Is Upset About The 'American Idol' Top 3 Results: "Who TF Is Voting?"
By Jake Viswanath
How 2 'American Idol' Singers Performed With COVID-19 & Made It Into The Top 5
By Jake Viswanath
Pete Davidson Mentioned Kanye West & Ariana Grande In His Last 'SNL' Sketch
By Grace Wehniainen
Kourtney Kardashian & Travis Barker’s Italian Wedding Photos Are Finally Here
By Grace Wehniainen
Get Even More From Bustle — Sign Up For The Newsletter