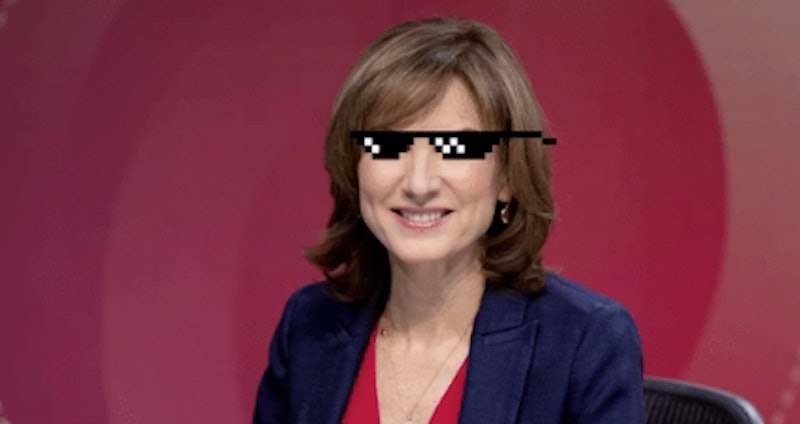 BBC Question Time is one of those iconic shows where politicians, public figures, and members of the general public are all put in a room and put to task for our enjoyment. Basically like watching an argument where (hopefully) at least one of your opinions is voiced and then you can totally steal that argument for future use. Now that's my tip of the day. My other tip is to check out these tweets about Fiona Bruce's first Question Time which prove she absolutely killed it.

Now for those not familiar with the history of the show, as the Guardian reports, it was previously hosted by David Dimbleby for 25 years, who recently handed the mantle to Bruce. Now you might recognise her best as the host of guilty pleasure of all guilty pleasures, The Antiques Road Show, or as a newsreader on BBC, but y'all she has been killing it as a journalist and broadcaster for quite some time.

So needless to say, there was a lot of excitement and hype regarding her taking over the show. And y'all, she smashed it out of the damn park I'll tell ya. And you know Twitter had a lot to say on the matter. Fans of Bruce know her well for her firmness, confidence, and ability to handle herself in a multitude of situations. Basically #goals.

The hype regarding her new job has been pretty hectic, and like dare I say buzz, but there has been a buzz.

Word on the street is Bruce was nervous ahead of the first show, according to the BBC. OK so I want to know exactly what method she uses to deal with pre show nerves because wow.

The reviews came flooding in pretty quick, in the non televised version of Question Time—Twitter.

One particularly notable moment was when she told one panellist that he had "to occasionally stop talking".

And let's be honest, it's a lot more polite than screaming "SHAAAAAAATAAAAP", but it's basically that vibe.

She is swiftly becoming the voice of the nation, one that is pretty fed up of all the current B.S.

But at the same time causing a lot of "oh no she didn't" moments that have you screaming. This is basically entertainment in the raw.

Can someone tell me when her merch line is out?

Calling out panellists for not answering questions and also live fact checking means the future of BBCQT is set to have a lot of OMG moments.

Which might sound like, obvious but honestly guys this whole new, female fronted, not taking any nonsense, strong AF approach kind of is a first for the show.

So go on ahead Brucie, we salute you. I am about to be watching BBC Question Time on the regular from this point on.

Watch BBC Question Time On BBC iPlayer and on BBC1