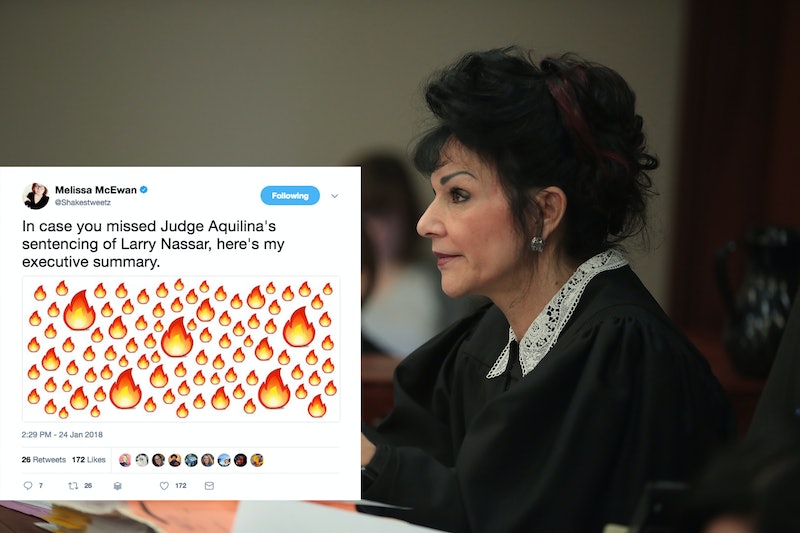 When a judge told Larry Nassar on Wednesday that he'd be spending the rest of his life in prison for sexually abusing young girls, she didn't just sentence him; she completely eviscerated him. In addition to 156 women confronting the former Team USA gymnastics doctor about the sexual abuse they allege he disguised as medical treatment over seven grueling days in court, the judge repeatedly put Nassar in his place. In fact, tweets about Judge Rosemarie Aquilina show she's now a bona-fide feminist icon.

"I've just signed your death warrant," Aquilina told Nassar after sentencing him to up to 175 years in prison. "It was my honor and privilege to hear these survivors. It’s my honor to sentence you. You do not deserve to walk outside a prison again."

Her words struck a chord with those tuning into the high-profile trial of a convicted sexual abuser, and her dramatic demonstrations drove her point home. After reading parts of a letter Nassar sent to her last week — in which he claimed he was a "good doctor" who the media had portrayed as "wrong and bad" — Aquilina ripped up the letter right in front of him. "I find that you don’t get it, that you’re a danger," she told him.

Women across the nation praised Aquilina for the way she handled the case, and the discussion about her on Twitter highlights how she's already made a name for herself.

"The Queen of the Courtroom"

Her real name may be Judge Aquilina, but she received myriad flattering nicknames this week.

"#MeToo Hero Of The Week"

She was seen as a #MeToo hero because of the major role she played in locking up a serial sexual predator.

Aquilina's statements in court didn't seem to hold back.

"Thoroughly Disgusted And Out Of Giveable Fucks"

The way she spoke to Nassar and the courtroom at large with candor really resonated.

Why We Need More Female Judges

Nassar's trial would have looked completely different with a male judge.

She's Got What The Oval Office Doesn't

Some people expressed that they wish more people in power had Aquilina's leadership, compassion, and basic fairness.

A Model To All

Aquilina allowed more than 100 women to face the man they accused of sexual abuse and recommend that he be locked up for good. For that, she was called "a model to all within the criminal justice system."

Some advocated for new judicial awards to be formed in her honor.

Her rockstar performance at Nassar's trial led to speculation about her future, which could perhaps include a potential seat on the U.S. Supreme Court.

Forget SCOTUS, others wanted to see her go straight to the White House.

That line was truly badass.

Justice Is A Dish Best Served ...

Donate To A Good Cause

Needless to say, the judge has some new fans.