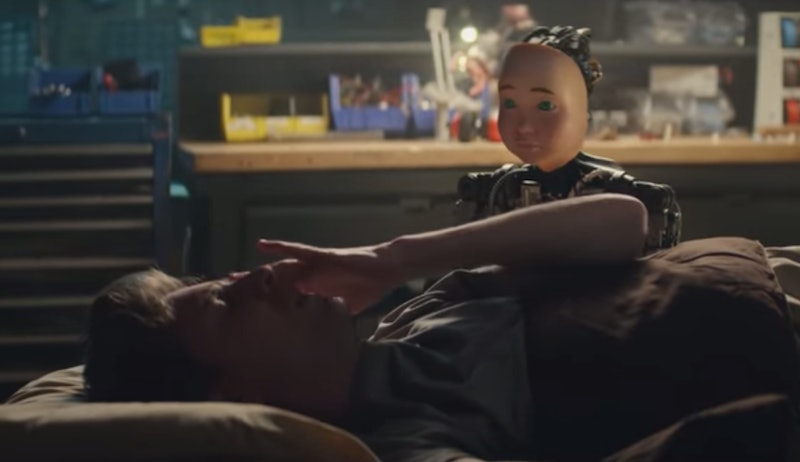 Every year, casual Super Bowl viewers are waiting for exactly two things: An entertaining halftime show and hilarious ads. However, the RoboChild Super Bowl commercial had fans scratching their heads. The video featured a robotic child, and naturally, the internet was terrified by its realness.

The young robot had a human face, with wires snaking on the back of its head, leaving the rest of its body exposed. The commercial opened with RoboChild hovering over its sleeping, human father — or "Papa," as it calls the man. This is likely its creator, who, as humans are wont to do at night, is just trying to catch some ZZs. But although it's 3 a.m., the young robot wakes the man up and says it's hungry. "You're not hungry — you don't eat, RoboChild," Papa says. "Yes I can, Papa," the machine responds. "I want a kale salad with chicken and guac. I know guac is extra. Hashtag living my best life."

Twitter was both confused and terrified by the ad's subject, wondering how any of this actually related to TurboTax.

TurboTax continued RoboChild's journey toward becoming a real boy on social media, releasing videos where it reacted to different football terminology. For the term field goal, for instance, RoboChild confused it with regular goals, saying in a short clip on Twitter, "My field goal this year is to learn to tie my own shoes and spend more time with my Papa." In another, RoboChild asked viewers, "Want to watch the Super Bowl with me and be my friend and enjoy a human experience?"

The brand then revealed in another commercial that RoboChild wants to become a TurboTax Live CPA when it grows up, but a woman breaks the news that it's never going to be emotionally complex enough to do that job. The small robot says it's sad, but instead of crying, it laughs hysterically. Papa explains to the other people in attendance that they're still working on expressing emotion.

Whether or not this abject horror toward the robotic boy was an intentional marketing technique, Twitter was terrified by RoboChild's pseudo-realistic face. The scary android's unsettling features were punctuated by its childish voice, monotone delivery, and desire to to be cool like other kids its age. After all, what tween kid doesn't love eating kale salads with guac with its Papa? Hashtag normal boy.

So whether or not RoboChild will fulfill its dream of becoming a TurboTax Live CPA, it seems that the brand will continue releasing updates on its life as the Super Bowl continues. What's more, it's unclear whether the AI will achieve its desired human status or if the world will ever love its exposed wires as Papa does. But one thing is clear: Guac is extra, and so is RoboChild.