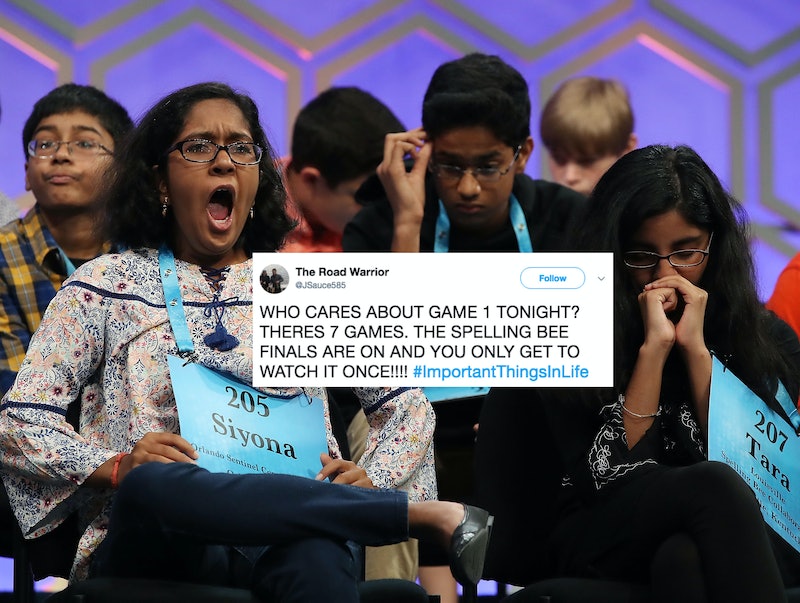 Thursday is both the first game in the NBA finals and the final day of the Scripps National Spelling Bee — and if the chatter on Twitter is any indication, people are a lot more excited about the bee. As the 16 finalists in this year's contest faced off for the grand prize, the multitude of tweets about the 2018 National Spelling Bee suggest that the Scripps event might be giving the NBA a run for its money.

"Why would they make the national spelling bee the same night as game 1 of the finals," one Twitter user lamented. "Now i [sic] have to miss the game damn it."

"I’m watching game 1 during the commercials of the national spelling bee," another Twitizen declared as the competition kicked off.

"WHO CARES ABOUT GAME 1 TONIGHT?" yet another spelling bee fan exclaimed. "THERES [sic] 7 GAMES. THE SPELLING BEE FINALS ARE ON AND YOU ONLY GET TO WATCH IT ONCE!!!! #ImportantThingsInLife."

Part of the reaction could well be due to fatigue with the NBA. After all, 2018 is the fourth straight year that the Golden State Warriors have played the Cleveland Cavaliers in the finals. Even for diehard fans of the sport, watching the same matchup year after year can become a little bit tiresome.

And yet the spelling bee, while not as flashy as the NBA championship, is immensely popular in its own right. From its humble roots as a statewide event in Kentucky, the spelling bee has steadily grown into a nationwide phenomenon over the course of the 90-plus years it's been in running. In addition to being profiled in several major motion pictures — one of which, the documentary Spellbound, won an Academy Award — the spelling bee is now broadcast on ESPN.

It continues to grow in popularity: This year's contest featured a record-breaking 516 kids competing for the grand prize, compared with just 291 the year before. Because of that, the organizers have had to tweak the format over time to make it more manageable, steadily adding more days to the event  — it used to just take place in an afternoon — and controversially, adding a vocabulary test to the competition in 2013.

As the spelling bee has become bigger, so has the grand prize. The winner of this year's bee will take home over $42,000 cash, in addition to several other goodies. That's a far cry from the $1,000 prize the winner of the 1926 competition took home; even when adjusted for inflation, that only comes to a mere $14,000 in 2018 dollars.

After a grueling day of competition on Thursday, it was revealed that this year's coveted prize is going to 14-year-old Karthik Nemmani of McKinney, Texas. Nemmani won the National Bee after correctly spelling the word, “koinonia.” According to Merriam–Webster, "koinonia" is defined as "the Christian fellowship or body of believers." Naysa Modi, a 12-year-old from Frisco, Texas, took second place. Modi mispelled "Bewusstseinslage," opening the door for Nemmani to correctly spell two more words and become the 2018 champion.

As USA Today reported, Nemmani was elated following his victory. "I had confidence, but I didn't really think it would happen," he said. "I'm just really happy. This has just been a dream come true." The paper also noted that Nemmani was immediately confident when he heard "koinonia," the final word, saying he knew instantly that he would be able to spell it correctly and become the national champion.

Social media certainly made it clear that many people were anxiously watching as Nemmani spelled his way to victory. For many on Twitter, tuning into the intense competition of the Scripps National Spelling Bee was far more appealing than watching game one of the NBA finals — and 2018's spellbinding competition certainly did not disappoint.

Sarah Friedmann contributed to this report.