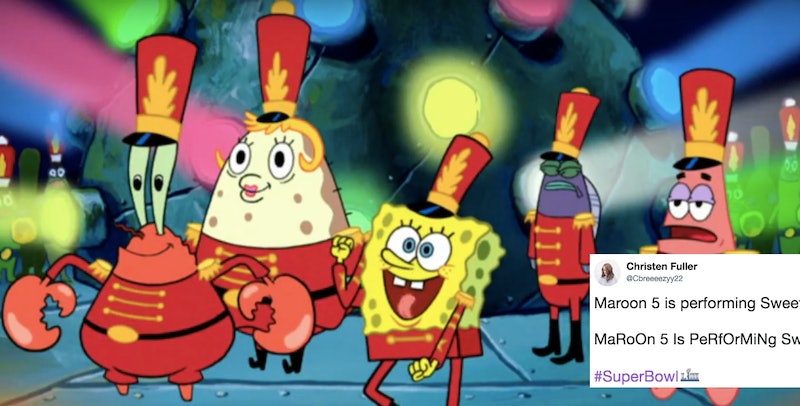 If you blinked, you probably missed it. SpongeBob SquarePants made a small, very quick cameo during the Super Bowl. Tweets about the SpongeBob Cameo at the Super Bowl halftime show show that fans were super underwhelmed by what seemed to be a salute to the animated series' song "Sweet Victory."

The SpongeBob cameo appeared on screen during the halftime show after headliner Maroon 5 performed the first two songs of their set. So wait, why would there be a SpongeBob cameo during this year's SuperBowl? Last year, SpongeBob SquarePants creator Stephen Hillenburg died at age 57. A Change.org petition soon emerged in which over 1.2 million people requested that the SpongeBob song "Sweet Victory" be performed at a the Super Bowl. The petition stated:

As some of you may or may not know, Stephen Hillenburg—the creator of Spongebob Sqaurepants—has passed away recently. As a tribute to his legacy, his contributions to a generation of children, and to truly showcase the greatness of this song, we call for Sweet Victory to be performed at the Halftime Show.

In the days leading up to the Super Bowl, rumors circulated that Maroon 5 might have "Sweet Victory" in their set list for the halftime show. Alas, the "Sweet Victory" clip was used as a transition to Travis Scott's performance during the show. You can see the cameo at the 2:53 mark in the video below.

And this truly came as a disappointment to fans on Twitter, who expected way more from the SpongeBob cameo.