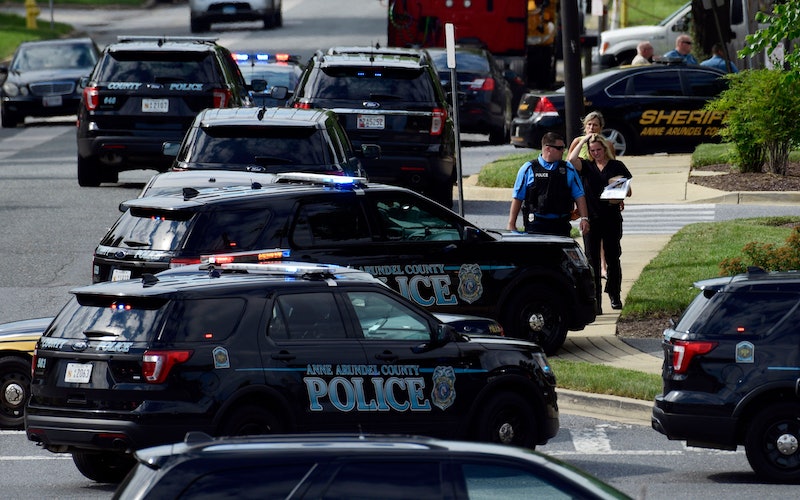 Authorities confirmed on Thursday that a "shooting incident" took place at the Capital Gazette's newsroom in Annapolis, Maryland. As reports emerged about the incident, tweets from Capital Gazette reporters about the shooting paint a horrific picture of what happened at the publication's offices.

So far, according to University of Maryland Medical Center, one individual has been admitted to the hospital for reported injuries. Anne Arundel Police confirmed that the building had been evacuated and that "officers [are] continuing to search building." Maryland's Office of Emergency Management advised locals to remain away from the area.

Maryland Gov. Larry Hogan released a statement on the situation on Twitter, saying that he was "absolutely devastated to learn of this tragedy in Annapolis" and was "praying for those at the scene and for our community." He added that he was in touch with County Executive Steve Schuh and the Maryland State Police.

Tweets shared by reporters and interns from the incident depict terrifying circumstances. In one case, an individual identified as an intern for the Capital Gazette tweeted about the situation and asked for help.

In another case, another Capital Gazette reporter Phil Davis described the scenario in grim and sobering terms.

Capital Gazette's Joshua McKerrow shared photos from the incident, where dozens of police officers and vehicles were stationed by the newsroom's building.

In another instance, Capital Gazette's Danielle Ohl tweeted a safety check on her colleagues including Phil Davis, Anthony Messenger, Rick Hutzell, Chase Cook, and Selene San Felice. "Rachael Pacella is in the hospital with an injury," she added.

The Maryland publication's reporter Davis also described the situation, saying that the suspect had "shot through the glass door to the office and opened fire on multiple employees." Dozens of people responded to Davis' tweet with support, condolences, and concern.

Perhaps the most heartbreaking plea came from Capital Gazette's Jimmy DeButts who implored others not to ask for comments or interviews freshly after the incident.

In a statement to the press, Schuh confirmed that there were fatalities as a result of the shooting. "Those fatalities are so sad and I don't know what to say except our thoughts and prayers are with them and their families and we take comfort knowing they're in God's embrace," he said.

Senators like Maryland Sen. Ben Cardin tweeted condolences and support for the publication. "Devastating. My heart is with Capital Gazette and the people of Annapolis right now. As information continues to come in, I remain as grateful as ever for our first responders. If you're in the area, please stay inside and stay safe," Cardin said.

Sen. Chris Van Hollen tweeted, "My heart is with the families, friends, and loved ones of the victims as we learn more about this terrible situation. We must unite to end the violence."

The Baltimore Sun reported Davis also described the scenario "like a war zone" that was "hard to describe for a while." The Capital Gazette reporter said, "I’m a police reporter. I write about this stuff — not necessarily to this extent, but shootings and death — all the time. But as much as I’m going to try to articulate how traumatizing it is to be hiding under your desk, you don’t know until you’re there and you feel helpless."

As CNN reported, the Capital Gazette has been committed to reporting on local news for years. The news network said that the publication "does a lot with a little, in terms of resources." With a team consisting of a few dozen editors and reports, CNN said the Capital Gazette was a busy place. It's clear that the shooting on Thursday rattled the publication's newsroom — and deepened some observers' concern about the press' safety in the United States.