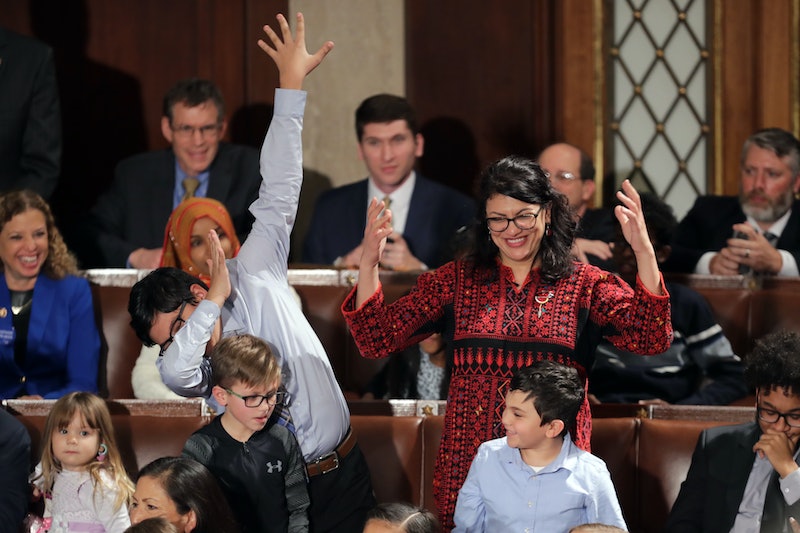 Rashida Tlaib's 2018 midterm election win was historic on multiple fronts, as she was the first Palestinian-American woman and one of the first Muslim women elected to Congress. The new congresswoman previously said she would wear traditional Palestinian clothing to her confirmation, and people celebrated Rashida Tlaib's swearing-in with the #TweetYourThobe hashtag on Thursday.

Tlaib first shared her plans to wear her thobe, a traditional Palestinian garment, in an Instagram post in December. "Sneak peek: This is what I am wearing when I am sworn into Congress," she captioned a picture of the black and red embroidered thobe. She included the hashtags "Palestinian Thobe" and "For My Yama," which means "mom" in informal Arabic.

She later talked more about her decision to wear the thobe in an interview with Elle magazine. "Throughout my career in public service, the residents I have had the privilege of fighting for have embraced who I am, especially my Palestinian roots," she told Elle. "This is what I want to bring to the United States Congress, an unapologetic display of the fabric of the people in this country."

The new congresswoman's supporters seem thrilled with her decision, and shared their joy through a hashtag specifically celebrating their thobes.

"So proud of @RashidaTlaib on her swearing-in day!! as an American-Palestinian Muslim woman, today is a beautiful day," wrote one Twitter user, posting two pictures of herself and her family in their thobes.

"Part of the movement to liberate Palestine is actively keeping the memory of our culture alive, which I do by wearing my traditional thobe," wrote another Twitter user. "Thank you @RashidaTlaib for manifesting a voice for Palestinian women and their journey for liberation."

The traditional dress wasn't the only way Tlaib vowed to honor her heritage on Thursday, either. While most congresspeople are sworn into office with a Christian Bible, it's actually not a requirement, as the Detroit Free Press notes. The congressperson being sworn in can choose any book at all — or even no book. Tlaib, as one of the first two Muslim women to have her own congressional swearing-in, chose to place her hand on a Quran, the holy book of the Muslim faith — but she's chosen one Quran in particular.

“It’s important to me because a lot of Americans have this kind of feeling that Islam is somehow foreign to American history,” Tlaib told the Detroit Free Press. “Muslims were there at the beginning… Some of our founding fathers knew more about Islam than some members of Congress now.”

To that effect, Tlaib chose to use Thomas Jefferson's personal copy of the Quran, which now belongs to the Library of Congress.

As Tlaib told the Detroit Free Press, she expected to get some pushback over her decision to use a Quran, and she already has from some conservative commentators. However, she told the paper that the decision wasn't based on religion so much as her vision for America — and her choice of outfit actually serves the same purpose.

“I believe in secular government," Tlaib said. "My swearing in on the Koran is about me showing that the American people are made up of diverse backgrounds and we all have love of justice and freedom.”