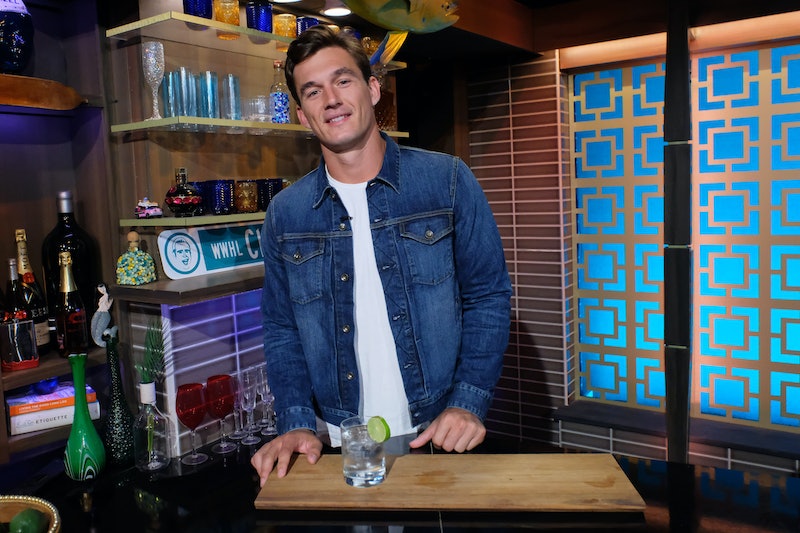 Hannah Brown may have just walked away from Dancing With the Stars as the new winner of the Mirrorball trophy, but all eyes continue to be on her ex Tyler Cameron. Lately, reports have started circulating that Tyler is dating Stassie Karanikolaou, Kylie Jenner's BFF, given that the two of them have been in close proximity to one another over the past week. In fact, on Monday, Nov. 25, they were spotted attending the same Los Angeles Rams football game and club hopping shortly thereafter, according to TMZ. Bustle reached out to both Stassie and Tyler's rep about the dating rumors, but had yet to hear back at the time of publication.

Kendall Jenner and Stassie documented their night at the football game on their respective Instagram stories, which featured plenty of snaps at the NFL stadium, but none of Tyler C. However, Tyler also shared some footage from the game on his own Instagram, and the two were photographed in close proximity.

But Tyler wasn't the only member of Bachelor Nation in attendance. He was joined at the game by some of his fellow Bachelorette costars Dylan Barbour and Peter Weber, the latter of which is the next Bachelor. They were all gathered in a privately enclosed area at one point, thereby creating the Jenner-Bachelor crossover you never knew that you needed.

Of course, just because Tyler and Stassie were at the same place at the same time doesn't automatically mean they're dating. That being said, Tyler did post a few things on his Instagram story while at the game, which hinted that he was there on a date — just not with the person you'd think. "Not a bad spot for a hot date," he captioned a snap of Dylan. (Gotta love a good Bachelor bromance.) But could he have been secretly referring to Stassie?

For his part, Dylan also took some footage of the night's events on his Instagram story, though, sadly it was lacking any Kylie, Kendall, Stassie content.

Later that same evening, Kylie, Stassie, and Tyler were photographed leaving the West Hollywood nightclub Poppy at 2 a.m. on Tuesday, Nov. 26, according to Us Weekly. But this isn't the first time that Tyler and Stassie have been spotted out together. E! News reported that the duo were looking rather flirty together at the West Hollywood nightclub, Hyde on Friday, Nov. 22. A source told the outlet that the alleged couple really hit it off right away. "Stassie and Tyler met up at the Clippers game last night and were hanging out for a bit," the insider revealed. "They had met in passing before at a few events in LA, but this was the first time they truly hung out and vibed with one another."

The source claimed that the two had such a great time together that they continued to hang out at the club for the rest of the day and apparently showing a lot of PDA. "He was holding her. They were whispering in each other's ears and talking the entire night," the source continued. "It was very apparent they were into each other. Tyler leaned in and kissed her neck at one point, and also definitely kissed her cheek in public."

This news comes right on the heels of Tyler's brief fling with Gigi Hadid. They called it quits over a month ago after a whirlwind romance over the summer. Perhaps he's now ready to move on, but until either Tyler or Stassie actually confirm their relationship, all anyone can do is sit back and speculate.