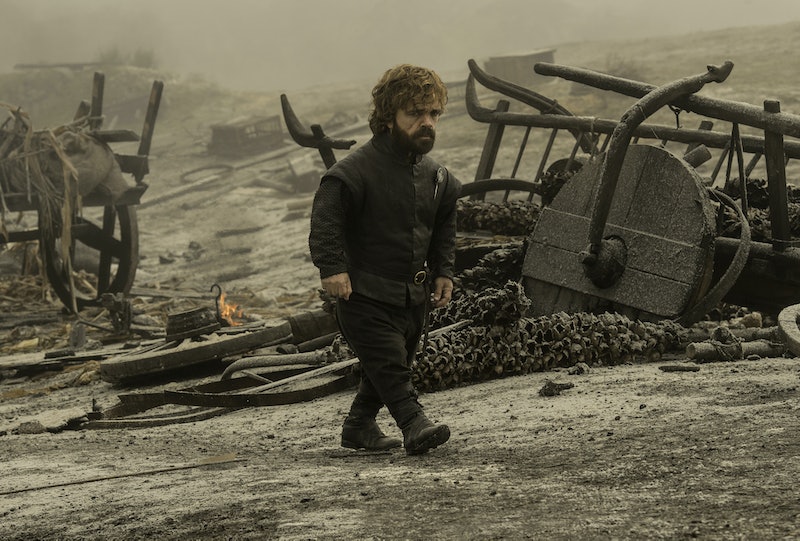 If you watched the Game of Thrones Season 7 finale, "The Dragon and the Wolf," you probably walked away with more than a few unanswered questions. Possibly no other scene left more furrowed brows than when Tyrion watches Jon enter Dany's room with a complicated expression on his face. Fans' jaws had already dropped at the thought of the two powerhouses of the series consummating a relationship that was rife with sexual tension from the moment Ned Stark's bastard son arrived in Dragonstone. But what made Tyrion look so sad in that moment? Was he thinking about his nights at the brothel or his doomed-from-the-start love for the prostitute Shae? Was his facial expression admitting a long unrequited love for the Mother of Dragons? Well, the answer is actually a bit more nuanced than that.

In an interview with The New York Times, director of the finale Jeremy Podeswa, addressed the very question. Because Tyrion is always thinking of the future, he was actually concerned about how this sexual step might affect the alliance between Dany and the North. Podeswa said,

"When things get personal, then people make decisions based on their emotions, and that can complicate matters going forward, so I think he sees the potential here for things to get very messy... It's also a question of what's going to be his role within this new alliance, right?"

The latter is particularly true. Even with the limited knowledge that Tyrion has of Jon's true parentage, he must understand that if Dany enters into a liaison with a man, that man could potentially wed her and become king. This could put Tyrion's role both as the Hand of the Queen and her closest advisor at stake.

Given Tyrion's recent screw ups, from sending the Unsullied on a failed mission to Casterly Rock to watching key alliances crumble thanks to the Lannisters conquering Highgarden and capturing Ellaria Sand and Yara Greyjoy, he feels his influence waning. No doubt he also fears the loss of his leadership position altogether.

That doesn't even factor in the reality that Jon Snow is, for all intents and purposes, the rightful heir to the throne. The season finale made it abundantly clear that Ned Stark's bastard is actually Aegon Targaryen, the legitimate son of Rhaegar Targaryen and Lyanna Stark; given that title, his claim to the throne may be stronger than Dany's. So where would that leave Tyrion?

However, the theory that Tyrion loves Dany may still carry some weight — just not the way you think. When asked about it, Podeswa said,

"Everyone seems to be in love with Dany, in a way, and I think Tyrion's a little bit in love with her. But I don't think it's an actual romantic love.... With Tyrion, it's all about who is going to have sway over her?"

Unfortunately, there will be quite a bit of waiting to find out if Tyrion's motives go beyond an anxiety about losing power. In the meantime, pull out those maps of Westeros and start making guesses as to which Houses will be the last ones standing.

More like this
Twitter’s Reaction To HBO’s ‘Game Of Thrones’ Jon Snow Spinoff Idea Is Chaotic
By Stephanie Topacio Long
Here’s Who Victor Chooses In The ‘Love, Victor’ Season 3 Finale
By Brad Witter
Who Could Die In The Stranger Things Season 4 Finale?
By Kadin Burnett
The Umbrella Academy Cast Breaks Down That Wild Season 3 Finale
By Gretchen Smail
Get Even More From Bustle — Sign Up For The Newsletter