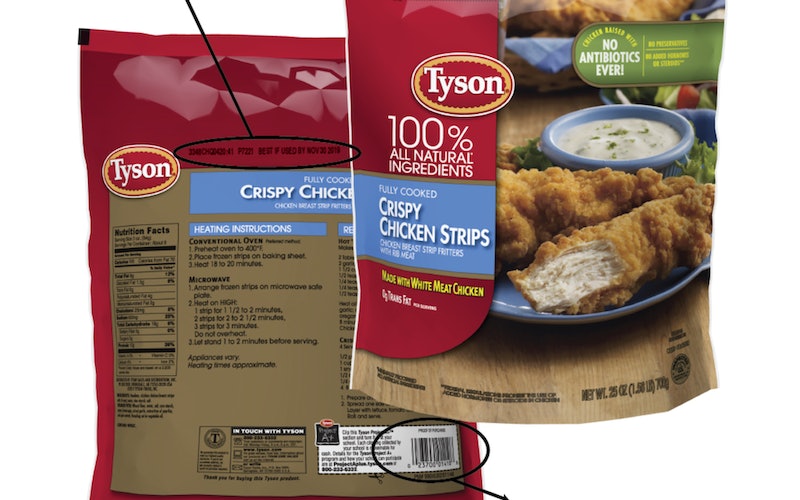 The United States Department of Agriculture and Tyson Foods announced today that Tyson is voluntarily recalling 69,093 lbs. of chicken strips because metal fragments were reported in the frozen, ready-to-eat chicken strips by two consumers. "Even though these reports involved only two packages, out of an abundance of caution, the company is recalling these products. Tyson Foods has received no reports of injuries or illnesses associated with the affected product," Tyson said in a press release.

Tyson reported that each of the affected products also bears the establishment code P7221 and a use by date of Nov. 30, 2019. The products were all produced at one location on Nov. 30, 2018. If you recently bought Tyson chicken strips, you can check the back of the package for the codes.

"For product clarification, the last two digits of the product case codes correspond to the hour produced and will match the first two numbers of the time stamp (as depicted on the label). These items were shipped to retail locations nationwide and for institutional use in locations in Michigan and Washington," the USDA Food Safety and Inspection Service reported in a press release.

"The problem was discovered when FSIS received two consumer complaints of extraneous material in the chicken strip products," the USDA FSIS said. "There have been no confirmed reports of adverse reactions due to consumption of these products. Anyone concerned about an injury or illness should contact a healthcare provider."

The recall is classified by the USDA FSIS as Class 1, which refers to a potential health hazard where there is a reasonable possibility that using the product in question could cause serious injury or illness. "FSIS is concerned that some product may be in consumers’ freezers. Consumers who have purchased these products are urged not to consume them. These products should be thrown away or returned to the place of purchase," the press release stated.

While no injuries have been reported, the recall has been initiated voluntarily in the interest of public safety. If you suspect you might have this chicken in your freezer, you can view a PDF of the labels on the USDA FSIS website. If your chicken is affected and you'd like a refund, cut the proof-of-purchase label off the back of the package and call 1-866-886-8456, Tyson advised, or return the product to the store.