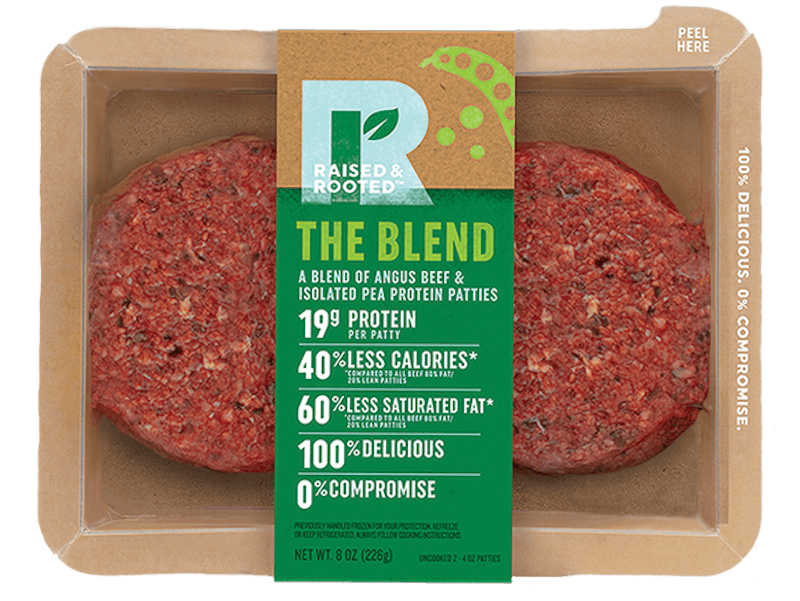 Whether you’re a totally plant-based foodie, or you’re just aiming to eat less meat, Tyson Foods is upping the meatless meat game soon. The U.S.-based poultry brand is rolling out vegetarian, chicken-flavored nuggets this summer, and will also offer blended products — which do contain some meat — for consumers looking to consume less animal products. According to a recent Tyson press release, the new Raised & Rooted brand is a response to consumer demand for alternative protein products, and will launch at a number of major retail outlets this year. This rollout makes Tyson the largest U.S. meat producer to develop its own line of plant-based foods, the press release says.

With "flexitarian" dining on the rise in the United States, Tyson recognized an opportunity to hop on the eating-less-meat train with its new line. “Today’s consumers are seeking more protein options, so we’re creating new products for the growing number of people open to flexible diets that include both meat and plant-based protein,” said Noel White, president and CEO of Tyson Foods in the press release. “For us, this is about ‘and’ — not ‘or.’ We remain firmly committed to our growing traditional meat business and expect to be a market leader in alternative protein.”

While a recent Gallup Report shows that less than one in 10 Americans stick with a 100% plant-based diet on the regular, more people are trying to reduce their intake of animal products overall. The surge in popularity of plant-based meat and dairy alternatives means that a flexitarian approach to meal planning is becoming more common, Gallup says. Tyson’s new meatless nuggets are expected to hit grocery store shelves by late summer, Gizmodo reports, while the blended burgers, which contain both beef and pea protein, are expected to roll out this fall. (A friendly reminder that all "plant-based" means is that it contains mostly plants — it isn't necessarily the same as vegetarian or vegan.)

“While most Americans still choose meat as their primary source of protein, interest in plant and blended proteins is growing significantly,” said Noelle O’Mara, Tyson Foods’ chief marketing officer, in the press release. “These products appeal to a broad cross section of consumers who enjoy food from a variety of protein sources, and we expect interest to continue to grow across protein types. The Raised & Rooted launch, and our pipeline of innovation, will reflect our consumers' expectations for 100% plant based, blended, and traditional protein offerings.”

Tyson’s new chicken-flavored nuggets are made with a blend of plant ingredients and pea protein isolate, while the burgers contain pea protein mixed with Angus beef. Additionally, Aidell’s Whole Blends products, also owned by Tyson, include a line of pre-cooked sausage links and meatballs made with a mixture of hormone-free chicken and plant-based ingredients, such as chickpeas, lentils, black beans, barley, and quinoa, the press release states.

Whether you’re a 100% plant-based eater, or a part-time vegetarian or vegan, the Raised & Rooted launch aims to increase your options when it comes to convenient, alternative protein choices. CNBC reports that the brand has also been working with start-up companies committed to the development of tasty and nutritious meatless products. This new launch is just one of many that show how consumers like you and me are looking for more options than ever.