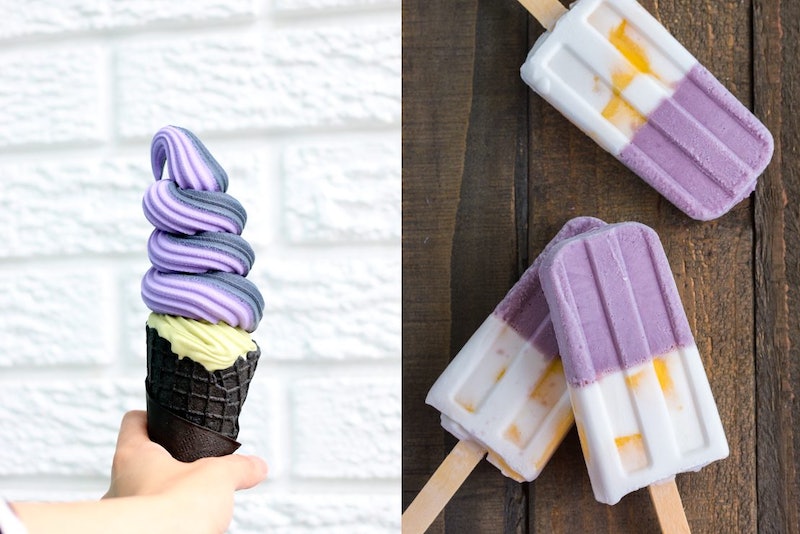 In Southeast Asia, in the archipelago of 7,641 islands that comprise the Philippines, a lush foodie paradise is found. Here, coconuts, mangoes, and okra are harvested in abundance, as well as lanzones, rambutan, durian, and a serious contender for the flavor of summer 2019: ube. There is an unmistakable Filipino sense when you say the word ube. It is a root crop that everyday Filipinx people eat; it can also be found on vines as tall as century-old mango trees. The buttery-sweet taste is incomparable to those found in other cuisines.

A far-removed cousin of taro, ube is well-loved by foodies for its delicious flavor as well as its bright purplish hue, which, in 2019, means it's also become somewhat of an Instagram darling. Prior to ube’s rise in Western cuisine, the tuber was found in restaurants and markets situated within Filipino enclaves throughout the U.S. Nowadays, you can find ube at many Asian-owned cafés.

When I was a kid growing up in the Philippines, an old man named Manong Sorbetero would peddle around a painted wooden cart with canisters filled with three ice cream flavors: cheese, ube, and tsokolate (chocolate). I would get all three flavors stacked on a cone and eat away under the afternoon sun.

Now, in the States, ube has achieved mainstream status — as purple pints of ube ice cream made their way to Trader Joe’s frozen sections. Many have taken to social media to post their excitement about the inclusion of this flavor in a major grocery store. There have also been skeptics and lukewarm reactions, suggesting that without overt acknowledgment that ube is a traditional Filipino food, the choice to sell it could be interpreted as cultural appropriation. (Bustle has reached out to Trader Joe’s about allegations of cultural appropriation, and we will update this story when we hear back.) Still others see it as a neutral way to introduce traditional Filipino flavors to a new audience.

“The inclusion of ube in a mainstream American grocery store does not mean validation of our cuisine; we see it as proof that the Philippines has delicious food,” Prescilla Tolentino and Catherine Tolentino, owners of Gemmae Bakeshop, a Filipino bakery in Long Beach, California, tell Bustle. “Ube is a traditional, uniquely Filipino food and I think it’s great to share it with others because it opens up conversation about our culture.”

Janelle Quibuyen, creative director for Hood Famous Bakeshop, a Filipino bakery in Seattle, Washington, tells Bustle that, “I am neither completely ecstatic about the ube ice cream being introduced to a mainstream audience at Trader Joe’s, nor am I completely angry or offended.”

The number of comments — mostly neutral, and not angry — inspired me to try it out myself. But my initial experience with the purple pint was lackluster. I tasted vanilla ice cream intertwined with hints of ube, which to me was a diluted version of the beloved ice cream I grew up with. The lack of ube chunks, plus the grape, red cabbage, and beet juice additions, felt like a clear catering to the Western crowd. Still, I found the flavors light, delicate, and pleasant, even if it was fundamentally different than the kind I’d grown up with.

On the package, there was no acknowledgement that its main ingredient was a distinctive flavor of Filipino cuisine — no Filipino flag on the carton, no indication that the product had its roots in the Philippines. I can see this leading to non-Filipinxs believing they've discovered something "new" in this tasty, purple dessert, when what they have in their hands is a stand-in for the plethora of flavors found in Filipino cuisine.

Trendy supermarket pop-ups carrying ingredients I’ve grown up with is absolutely fine with me, but it becomes a problem when the appreciation for my culture is not conveyed. The supermarket of my dreams is not a trendy warehouse in Los Angeles filled with organic food farmers from Ventura County. The supermarket of my dreams is the street I grew up in, where crops were wheeled around and sold by the farmers who planted them. Like the man I grew up buying ube ice cream from.

Every Sunday, Manong Sorbetero would come back to the neighborhood with the leftover ube he didn’t use to make the ice cream he sold during the week. His sales voice was like a battle cry — the more ube he sold, the more school supplies he could buy for his children. He worked hard to farm a root crop, sing to its vines, watch the fruits grow, jump with joy during the abundant harvest. He would make the painstaking trip to Manila to sell ube, roll his makeshift cart's squeaky wheels down the cacophonous city streets, and hope that maybe a kid with a few coins would hear his sales pitch. He'd hope that maybe, his crop would change her life so much that someday, she would share the story of how ube will always be a labor of Filipino love.

When Western companies profit off Filipino culture without acknowledgement, they are continuing a history of cultural appropriation that began with the Spanish, then the American, colonization of the archipelago. When the cultural and historical significance of something like ube goes unacknowledged, it makes Filipinx immigrants like myself feel erased. Sometimes, memories and a tall glass of halo-halo topped with a scoop of ube are all I have to make the gut-wrenching homesickness go away. I may not know how to feel about ube being Instagram’s flavor of the summer, but I do know how important this purple tuber is to me.