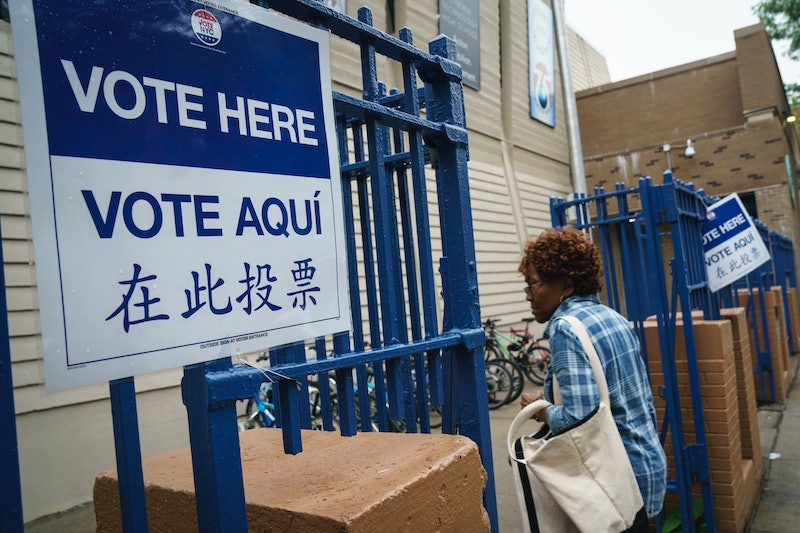 If getting to the polls to vote is an issue for you, two ride sharing companies are looking to help. On Election Day 2018, Uber and Lyft will offer free or discounted rides to voters, as reported by Fast Company. Both companies are teaming up with voting organizations to get people registered and get them to the polls come Tuesday, November 6.

As announced in a press release from CEO Dara Khosrowshahi on October 4, Uber is partnering with When We All Vote to get people registered, and with #VoteTogether and Democracy Works to offer free rides to polling locations. Uber has already started including voter registration information for users on its app. The company will also be hosting registration drives — for Uber drivers and others — at its Greenlight Hubs, which are generally used as places for drivers to get support and information.

To get a free ride to the polls on Election Day, Uber users will need to open the app, search for their polling place, and book a ride. It appears that it will be difficult to use the free ride for anything other than going to the polls, since you have to search to locate your polling location in order to get the free ride.

As for Lyft, it announced its Election Day plans back in August. Lyft paired up with Vote.org, TurboVote, Nonprofit Vote, and more organizations, which will distribute promo codes for 50 percent off of rides intended to get people to their polling location. In addition, Lyft, in partnership with Voto Latino, the National Federation of the Blind, and Urban League affiliates will provide free rides in underserved communities.

As with Uber, Lyft is also encouraging voter registration via its app and for its employes at Hub locations. For its get out the vote efforts, Lyft teamed with When We All Vote and National Voter Registration Day. For anyone who is still looking to register to vote, be sure to check the deadline in your location since they differ between states. Many of the deadlines are coming up very soon.

Bustle has reached out to both companies for comment on whether they will offer free or discounted rides for voters to return trips; a representative from Uber responded saying in their discussions #VoteTogether and Democracy Works, they would like to do rides both to and from the polls. As of press time, Lyft has not responded, but Bustle will update this post upon response.

UPDATE: Lyft has responded saying it will not provide rides back from the polls.

According to Pew Research, 3 percent of registered voters who did not vote in 2016 cited "transportation problems" as the "main reason" they didn't vote. Three percent might not sound like much, but considering tens of millions of people who were registered to vote didn't, it's quite a lot. On top of this, 14 percent cited "too busy or conflicting schedule" and 2 percent "inconvenient hours or polling places", which also go hand in hand as all of these issues tend to effect low income communities, and could explain the lower voter turnout for low income people versus the rich. This is why Lyft wants to offer free rides to underserved areas in particular, where its more likely people are working odd hours or don't have transportation to their polling place.

More information about how to take advantage of the free or discounted rides can be found on Uber and Lyft's websites.