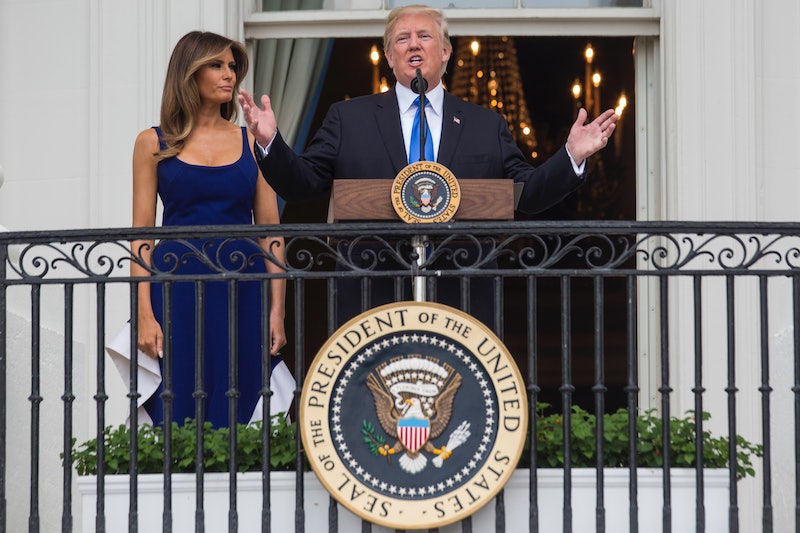 As he delivered his speech in Warsaw's Krasinski Square on Thursday, Trump thundered to the Polish crowd that "the West was saved with the blood of patriots." Later in the day, he shared a Fox News tweet of the video of the speech on Twitter. Unfortunately, it contained an unfortunate error, misspelling "patriots" so that the Fox News clip's chyron read, "POTUS: West Saved by the Blood of Patriarchs."

During live speeches like this one, chyron writers have to provide verbatim quotes from the speaker in real time. This can be difficult, and mistakes are not uncommon. However, this particular misspelling left social media users quite amused.

Here is what Trump actually said:

The memories of those who perished in the Warsaw Uprising cry out across the decades, and few are clearer than the memories of those who died to build and defend the Jerusalem Avenue crossing. Those heroes remind us that the West was saved with the blood of patriots; that each generation must rise up and play their part in its defense and that every foot of ground, and every last inch of civilization, is worth defending with your life.

As The Washington Post's Aaron Blake suggested, Fox News' "patriarchs" gaffe was perhaps rendered all the more hilarious by the fact that Trump is one of the least likely people to credit other patriarchs for saving the West — or to laud the decline of the patriarchy, depending on how you interpret the chyron typo. However, Trump has said many shocking things in the past that "blood of patriarchs" would likely pale in comparison.

Many social media users, though thoroughly amused, were unsurprised by the error.

Nonetheless, the chyron typo provided a sufficient amount of entertainment on Twitter.

Despite how quickly Fox News' error was noticed, there were still some Twitter users who wondered whether Trump had actually said that the west had been saved with the blood of patriarchs. These people seemed to be in the minority, however, because the majority of tweets about the chyron typo poked fun at both Trump and Fox News.

Some Twitter users were convinced they had entered an alternate reality straight out of Game of Thrones, while others vaguely entertained the notion that the blood of patriarchs could be really useful for making magical sacrifices — a notion that had some actual patriarchs concerned.

Again, chyron typos are not that unusual, so this typo isn't particularly shocking. On the contrary, — and likely to the writer's displeasure — this particular typo was just too ironic for social media to ignore.