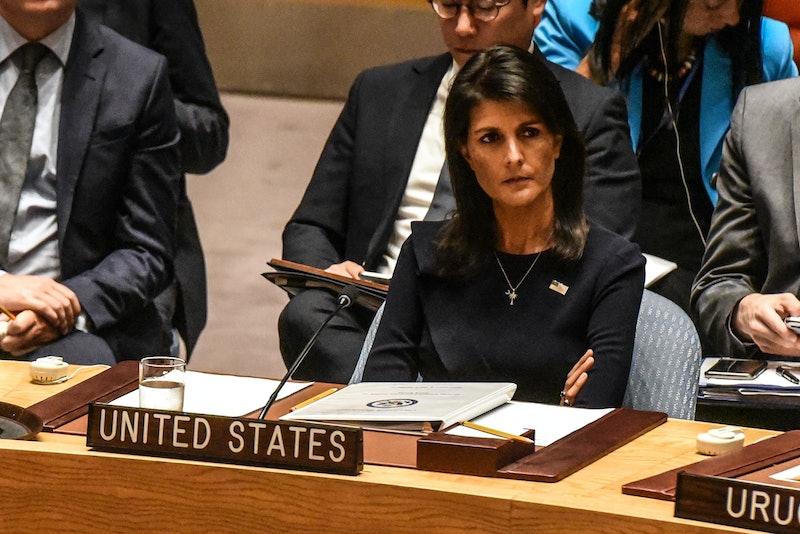 A day after President Donald Trump referred to North Korea as a "rogue nation" who "only understands one thing," U.S. Ambassador to the United Nations Nikki Haley claimed Kim Jong-un was "begging for war." In a statement delivered to the UN Security Council during an emergency meeting Monday, Haley appeared to fall just short of calling for military action. Instead Haley urged an exhaustion of all diplomatic measures, including expanded sanctions on not just North Korea but any country who trades with it.

"[Kim Jong-un's] abusive use of missiles and his nuclear threats shows that he is begging for war," Haley told the UN Security Council. "War is never something the United States wants. We don't want it now. But our country's patience is not unlimited."

Haley's comments came a day after North Korea was reported to have conducted its most powerful nuclear test yet. According to the Los Angeles Times, North Korean state media claimed the country successfully tested a hydrogen bomb capable of being attached to a missile with enough power to reach the continental United States. The device is believed to have an explosive yield of 120 kilotons, making it eight times larger than the device that destroyed Hiroshima during World War II, the LA Times reported.

"Only the strongest sanctions will enable us to resolve this problem through diplomacy," Haley said in her statement to the Security Council. "We have kicked the can down the road long enough. There is no more road left."

To drive home her point Haley listed every resolution passed by the Security Council — and openly disregarded by Pyongyang — in an effort to tap down North Korea's nuclear program. "Despite our efforts over the past 24 years, the North Korean nuclear program is more advanced and more dangerous than ever," Haley said. "They now fire missiles over Japanese airspace. They now have I.C.B.M. capabilities. They now claim to have tested a hydrogen bomb. And just this morning there are reports that the regime is preparing for yet another I.C.B.M. launch."

"We have taken an incremental approach, and despite the best of intentions, it has not worked," Haley went on to say. "The time for half-measures in the Security Council is over. The time has come to exhaust all of our diplomatic means before it's too late."

The former governor of South Carolina argued there was no way to quantify North Korea's recent nuclear tests and missile launches as defensive actions. "He wants to be acknowledged as a nuclear power," Haley said. She went on to warn the Security Council that Kim Jon-un showed no understanding of the responsibility that came along with being a nuclear power.

While Haley fell short of calling for military action, she appeared to echo Trump's recent call to ratchet up pressure on North Korea by moving to blacklist or sanction the communist country's trading partners. "The United States will look at every country that does business with North Korea as a country that is giving aid to their reckless and dangerous nuclear intentions," Haley said.

Monday's conference was reportedly the 10th emergency meeting the UN Security Council has held to discuss North Korea this year.