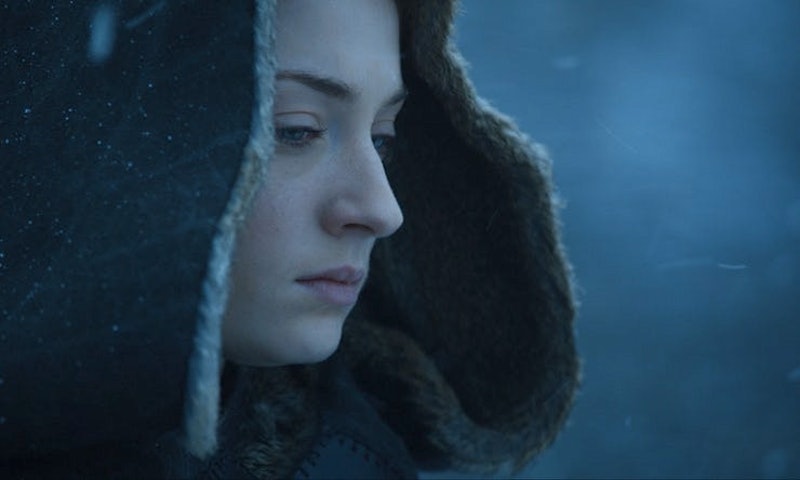 Game of Thrones ended its seventh season with the deceitful Littlefinger finally meeting his fate at the hands of Arya Stark. But it was the Lady of Winterfell, Sansa Stark, who made the decision to put Littlefinger on trial for all the wrongs he had done to her family. Over the years, Sansa has shown herself to be a strong leader who makes the hard decisions when need be. She called for an alliance with the Lords of the Vale to help Jon Snow win the Battle of the Bastards, and later took down Ramsay Bolton with her might — and some very hungry dogs. Then why is it that Sansa still can't get no damn respect from GoT fans?

Somehow, since Sansa's power comes from using her mind, instead of a sword, she is deemed "weak" in comparison to some of the more outwardly aggressive leaders in the Seven Kingdoms. Jon Snow has his sword and Daenerys Targaryen has her dragons, but that doesn't mean they are better or stronger leaders than Sansa — or that she doesn't deserve the respect those characters always seem to garner.

But, it's not just that Sansa isn't being respected because she doesn't assert her power through violence. She's just not even being respected in comparison to those characters who use their intelligence and ability to understand the political game of the Seven Kingdoms. For instance, look at Tyrion Lannister.

The Hand of the Queen isn't out there swinging a sword, but he is seen as a political force to be reckoned with by fans. But, honestly, Sansa has made much better decisions than he has of late, and she's helped her leader, Jon Snow, more than Tyrion has. Also, let's be honest, Sansa may have been able to see through Cersei's lies about wanting to save her baby and know that her well-delivered speech about helping the other house take out the White Walkers was insincere. This is something Tyrion couldn't see, leaving his Khaleesi and the rest of the world vulnerable.

In fact, Sansa may be the only one who truly understands what Cersei is capable of. She doesn't underestimate Cersei like so many others continue to do, despite knowing the evil she is capable of. Perhaps, because Sansa knows power can't be measured by armies, but instead by the strategy one constructs to get what they want.

The real problem is that too many fans see Sansa as the fragile child she once was, when in actuality she has learned from all the terrible things that have happened to her. “She went from being the young, innocent girl who saw the world through rose-tinted glasses,” actor Sophie Turner told USA Today last month. “And transitioned to being a prisoner but also a listener, adapting under the watchful eye of her captors.”

And Sansa's still willing to keep learning, taking counsel from others including her little sister Arya to figure out what to do next. "I'm a slow learner, it's true," Sansa told Littlefinger in the Season 7 finale. "But I learn."

Sansa's not a victim, but a survivor. Her time in King's Landing and with Ramsay have made her, to quote Daft Punk, "harder, better, faster, stronger." That's why the real lesson of Game of Thrones Season 7 is don't underestimate Sansa Stark or, like her enemies, you will be sorry.