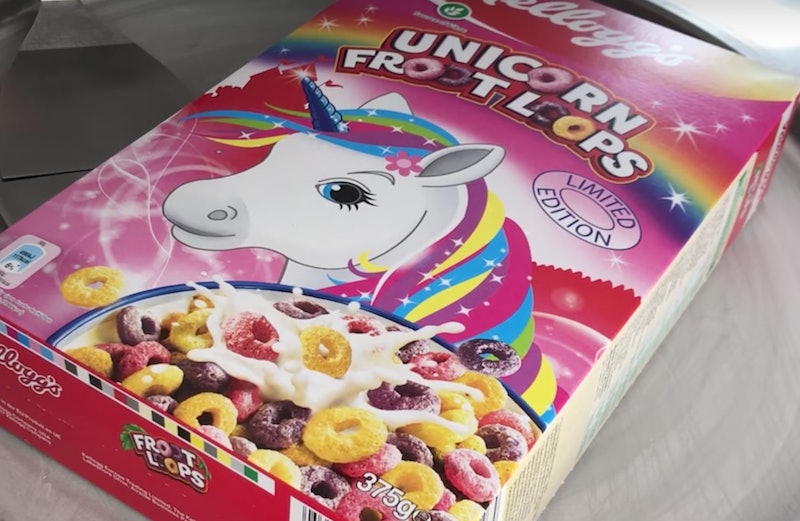 The unicorn trend is the trend that refuses to die, not that I'm complaining — because glitter. Rainbows. Sparkles. I ain't mad. But if you thought the fad was going to fizzle out anytime soon, I have news for you: Kellogg's has not only breathed some life into it, but they've totally raised the bar with limited edition Unicorn Froot Loops. Even if you're that strange breed of human who doesn't enjoy Froot Loops, you'll want to get your hands on a box just because it's so ridiculously pretty to look at and will definitely photograph beautifully for your Instagram page. There's one catch, though: you must be in the UK — or willing to fly to the UK on very short notice — because Unicorn Froot Loops are only available across the pond.

Kellogg's must've heard whispers that the unicorn obsession was on its way out and said, "Nah." The cereal comes in pink, purple, and yellow, and a cartoon unicorn with magical rainbow hair graces the front of the box, which is fake-sparkling and pink and all things wonderful. The cereal is reportedly made with natural colors only, which has me suspicious, but I'm not going to ask any questions because just look at it.

If unicorn hair and unicorn makeup didn't cut it, and Starbucks Unicorn Frappuccinos didn't quite satiate you, jam out in unicorn pants with your fancy schmancy cereal, and all will feel right in the world.

Froot Loops has never shied away from thinking outside the (cereal) box; other limited edition varieties have been made with marshmallows, heart-shaped cereal, "confetti," yogurt-covered pieces, and birthday cake flavor. While they were perhaps a bit late to the party, it's probably not all that surprising that they too decided to jump on the unicorn bandwagon with the rest of us.

I can't say much about that first matter, but people have their opinions on the second. Take Paul Buckley, for instance — he's a marketing and consumer psychologist with decades of experience. He spoke with Byrdie to explain why we're so in love with these mythical creatures. Buckley says we might do it to escape things that are troubling us in our lives — everyday problems like stress at work, money constraints, car repairs, misplacing things. It's similar to how we sometimes like to watch TV to escape, to get away.

There's also that connection to our childhood, Buckley says: "It's nostalgic — reverting back to an easier time." Remember My Little Pony?...

Vaughn Scribner, a history professor who studies mythical creatures, makes another interesting point: "This obsession with unicorns is nothing new — with social media, we’ve just found a different way to show it." In fact, we've been chasing unicorns and other mythical creatures since the 18th century, he says, hoping to find out they might actually be real. Across Europe, Asia, and the Middle East, people have been talking about the horned, horse-like creature with magic abilities for at least two millennia. We were already curious about unicorns. And now, with the additional ingredient of social media, our highly visual culture can get even more of it. We love the aesthetic appeal of the unicorn trend, in all its vibrant colors. It caters to our desire for something beautiful to look at.

Now, the unicorn trend isn't just fun to look at — it tastes good too. Enjoy these magical Froot Loops while they last, UK peeps.