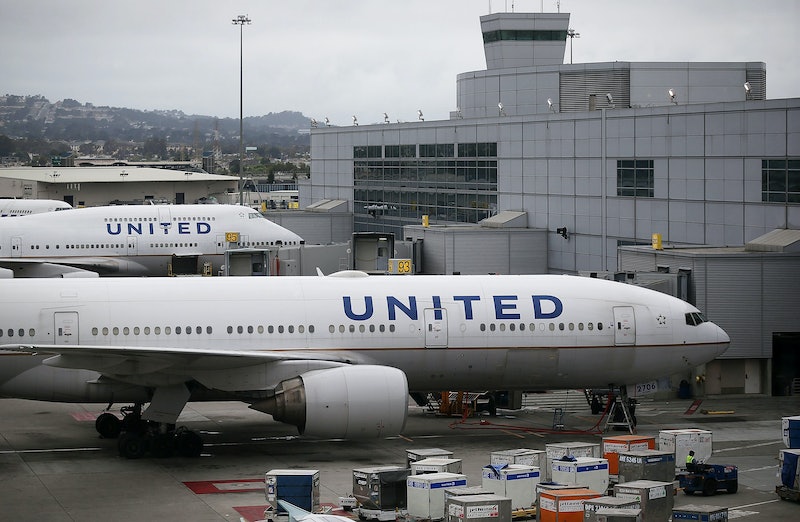 Most folks would consider leggings appropriate travel attire — but it turns out that leggings might not always work. On March 26, a United gate agent banned two female passengers from boarding because they were wearing leggings — but why? Update: The Washington Post reported that on March 26 United Airlines released a statement saying "The passengers this morning were United pass riders and not in compliance with our dress code for company benefit travel. We regularly remind our employees that when they place a family member or friend on a flight for free as a standby passenger, they need to follow our dress code." See its full statement at the bottom of this post.

Earlier: The incident drew media attention when Twitter user @shannonrwatts tweeted the exchange between gate agent and guests, saying, "Since when does @united police women's clothing?" Her tweets prompted a swift response from United's customer service Twitter; it stated that the two girls were in violation of Rule 21 of their Contract of Carriage. Rule 21 says that passengers who are "not properly clothed" may be refused or removed from flights.

A third girl reportedly put a dress on over her "not too tight" leggings and was permitted to board.

It sounds bizarre and unfair, but there's more to the story. According to The Washington Post, guests were traveling on employee passes, which means they were subject to an internal set of regulations. United Airlines spokesman Jonathan Guerin told The Washington Post those regulations specifically include a ban on leggings, and confirmed to that the guests "were not in compliance with our dress code policy for company benefit travel."

He added, “Our regular passengers are not going to be denied boarding because they are wearing leggings or yoga pants. But when flying as a pass traveler, we require this pass travelers to follow rules, and that is one of those rules. They were not compliant with the dress policy with the benefit. This morning, the attire of the pass travelers on this flight didn’t meet the dress code policy.”

United's explanation may satisfy some who side-eyed their response to Shannon Watts' tweet, but others are still relentlessly dragging United on Twitter.

Even celebs had something to say about it:

For the most part, Twitter users made it clear that this incident does not reflect well on the airline.

Bustle has reached out to United Airlines for comment on what constitutes proper attire for passengers flying with an employee pass, but has not heard back at this time.

Update: On March 27, The Washington Post reported that United Airlines has released the following statement:

"Let us take a moment to explain today’s news:

We care about the way we present ourselves to you, our customers, as we believe that is part of the experience on board our flights. One of the benefits of working for an airline is that our employees are able to travel the world. Even better, they can extend this privilege to a select number of what we call “pass riders.” These are relatives or friends who also receive the benefit of free or heavily discounted air travel – on our airline as well as on airlines around the world where we have mutual agreements in place for employees and pass riders.

To our regular customers, your leggings are welcome."