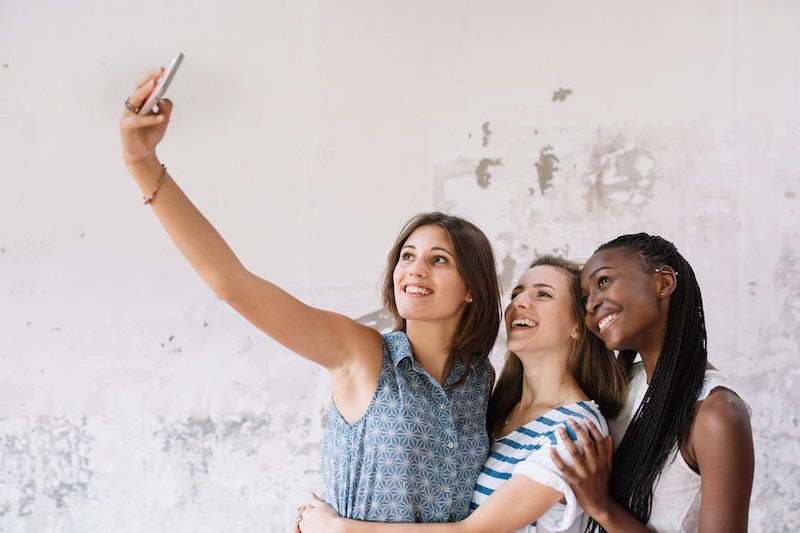 An unhappy truth: in the year 2019, many of us still feel societal pressure to find a spouse and have children, or are led to believe it's the sole pathway to future happiness. But behavioural scientist Paul Dolan says differently, as the Guardian reports: according to Dolan, unmarried women without children are the happiest population group, and could even live longer, too. Here's the Bustle take: whether you want children, or a spouse, or neither, or both, your goals are valid, and it's frankly no one's business but your own which you aspire to. But if you're anxious that it's humanly impossible to be happy without a ring and a few kids? Dolan's assessment might just reassure you.

Dolan, professor of behavioural science at the London School of Economics, spoke Saturday at the Hay Festival in Hay-on-Wye, Wales, discussing his latest book, Happy Ever After. In it, he assesses evidence from the American Time Use Survey as well as other studies to determine levels of happiness as they relate to marital and parental status.

There's a huge caveat to note before we get into his conclusions: at the festival, Dolan spoke largely of marriage as a monogamous relationship between a woman and a man. And since that definition can exclude queer people, non-binary people, polyamorous people, and others, it's a pretty serious limitation to be aware of when reading Dolan's comments.

What Dolan said: unmarried women without children are not only the happiest population subgroup, but they also live longer than married people and those who have kids. Data from the American Time Use Survey showed married people did report higher levels of happiness, but only if their spouse was present.

"Married people are happier than other population subgroups, but only when their spouse is in the room when they’re asked how happy they are. When the spouse is not present: f`***ing miserable," Dolan said.

Men do benefit from marriage, Dolan said, because they "[calm] down" when married. "You take less risks, you earn more money at work, and you live a little longer," he said. "She, on the other hand, has to put up with that, and dies sooner than if she never married. The healthiest and happiest population subgroup are women who never married or had children."

Some studies showed health benefits to marriage, Dolan said, which could be the result of both higher incomes and reliable access to emotional support. But again, these health benefits applied more to men, while married women in middle age were more likely to experience physical or mental health issues than single women of the same age.

Again, Dolan's comments address a pretty narrow section of the population, so it's best not to start applying them to every couple or single person or parent or childless person you know. But hey: if you've got relatives who won't stop pressuring you to lock down a spouse? Perhaps you might point them Dolan's way.