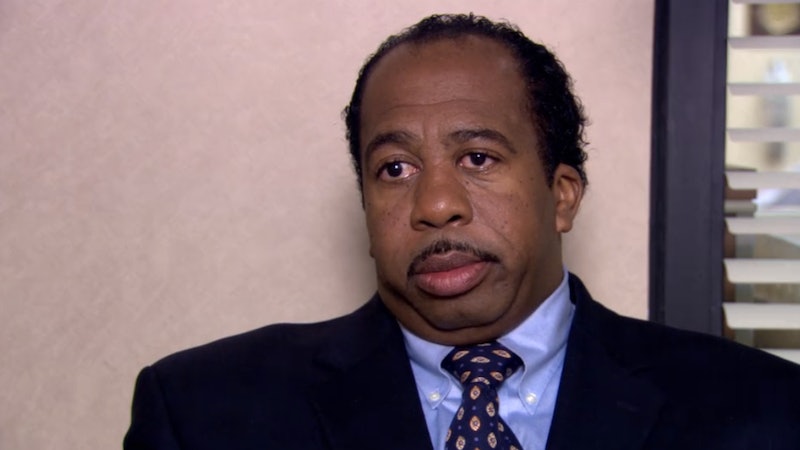 Is it Pretzel Day? Because something magical is happening: Leslie David Baker is launching a The Office spinoff focused on Stanley — sort of. On Thursday, July 2, Baker shared a Kickstarter campaign for a new show entitled Uncle Stan, that seems to be bringing his Office character out of retirement. But there is a catch: it's not exactly official, and the actor needs your help to do it.

In his official Kickstarter to help fund this new project, Baker was careful not to mention The Office anywhere in the show's description, but the videos announcing the project definitely seem to feature the actor back in character as retired Dunder Mifflin sales rep Stanley Hudson. Fans will remember that, at the end of The Office, Stanley retired and moved to Florida, only returning to Scranton to film the documentary reunion special and attend Dwight's wedding. Now it seems his retirement will be interrupted by his nephew Lucky who needs help with his kids and his business. The official Uncle Stan synopsis reads:

"After enjoying his retirement in Florida, carving wood, enjoying the white sand beaches, and dancing to old disco, Uncle Stan (Leslie David Baker) gets a call from his nephew Lucky in Los Angeles asking for help with his two kids and running his motorcycle/flower shop. With his business failing, his kids growing up without enough attention, and on the brink of losing his patience with the cast of characters he has working in the shop, Lucky is going to need all the help he can get from no-nonsense Uncle Stan."

Baker accompanied the announcement with three Instagram videos of himself in character as Uncle Stan. "It’s True! I’m really back! Uncle Stan coming soon!" he captioned a video of Stan saying "Yeah, I'm back. Where have you been?"

During the final season of The Office in 2013, NBC attempted to launch a Dwight spinoff with the backdoor pilot "The Farm." The network ultimately passed, but series creator Greg Daniels has been fielding questions about getting The Office gang back together since the show ended. "I loved doing The Office more than anything. And if we were going to revisit it, I would want to do it," Daniels said in an April interview with The Hollywood Reporter.

However, he went on to say that the idea of picking up where things left off with the same actors wasn't realistic. The finale was an "ending" for the characters that allowed many of them to leave the office behind. Having the entire gang return to Scranton just wouldn't make sense after they received such fitting sendoffs in the final season.

Baker's idea of taking a familiar character and placing him in a new situation is more exciting creatively than a straightforward reboot would be, while still giving fans the chance to see a familiar face. If you want to see the unofficial Stanley show, Uncle Stan, happen check out the Kickstarter campaign to help get everyone's favorite grumpy sales rep back to work.

More like this
Netflix Shut Down 'Bridgerton' S3 Rumours About A “Very Dark” Storyline
By Bustle
This 'Gossip Girl' Wardrobe Error Has Gone Viral On TikTok
By Alyssa Lapid
'The Queen’s Gambit' Season 2 Tweet Wasn’t From Anya Taylor-Joy
By Mary Kate McGrath, Jack Irvin and Grace Wehniainen
This 'One Tree Hill' Wardrobe Error Is Going Viral On TikTok
By Brad Witter
Get Even More From Bustle — Sign Up For The Newsletter
From hair trends to relationship advice, our daily newsletter has everything you need to sound like a person who’s on TikTok, even if you aren’t.