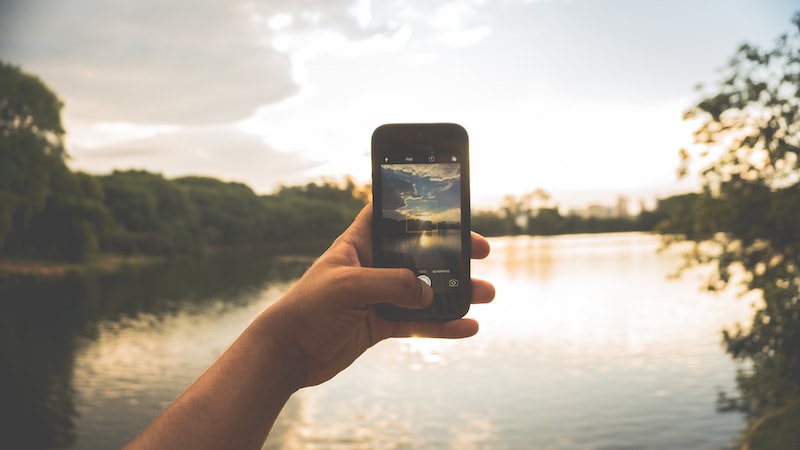 It's practically a universal law that if you're on social media, you'll threaten to unplug from technology at least once. After years of pressure to live your best public life, not to mention the steady stream of engagement announcements that later turn into wedding and baby announcements, deleting all your social media accounts and tossing your smartphone in the nearest body of water becomes increasingly appealing. But going off the grid is more difficult than it sounds, and according to a recent report, it's only getting harder as technology edges its way into more and more aspects of everyday life.

On Tuesday, the Pew Research Center and Elon University's Imagining the Internet Center published a paper looking at the long-lasting implications of the current "connectivity binge." Social media is an obvious example here, but technology has expanded to other parts of modern life: fitness trackers, "smart" home appliances, voice-activated assistants, and other such innovations that easily go unnoticed. This interconnection of machine and human life is known as the Internet of things, and researchers believe it's expanding at a rapid pace.

The authors of the report sent 1,201 experts a survey about the "trend toward greater connectivity of objects and people," beginning by asking whether people will start disconnecting anytime soon. Apparently, the answer is a resounding no. Just 15 percent of respondents said a significant number of people will log off. Meanwhile, 85 percent said the population will only become more connected, despite the possibility of malfunctions or hacking.

As the report points out, the Internet of things is hardly invincible. Self-driving cars, heart pacemakers, and even city traffic lights can be vulnerable to misuse, and as technology becomes more connected, these risks grow. Remember the distributed denial of service (DDoS) attack that took down many sites, albeit temporarily, last fall?

It's a scary prospect, but in the survey, most experts agreed that people aren't going to let that stop them from plugging in. For one thing, the Internet is too darn convenient. For another, many observed that over the next decade, technology will be so integrated in daily life that disconnecting will become almost impossible. "More people will be more deeply connected, but will likely be less aware of it," wrote one respondent.

Fortunately, there's some good news. Participants agreed that the Internet of things may have its security flaws now, but it's still in the early stages. As time goes on, people will figure out how to fix the issues that come up, and hopefully, they'll develop strategies to keep them from happening again in the

According to previous research from the Pew Center, 84 percent of American adults use the Internet today, and clearly, it's hard to avoid going online somehow even when you aren't glued to a computer. Like it or not, every time your smart watch sends data to your phone or you use the GPS to find your way to a new brunch place, you're using the Internet. If that bothers you, now may be your best chance to unplug for a bit. That's no easy feat in 2017, but it's unlikely to be any easier in 2027.

More like this
Remember These Ancient Pieces Of '90s Tech?
By Lucia Peters and Emma Carey
What Is “Night Luxe?” Breaking Down TikTok’s New Aesthetic
By Courtney Young
TikTok Is Using A ‘Love Island’ Sound To Expose Their Weird Crushes
By Courtney Young
Why Can’t I Go Live On Instagram?
By Emma Carey
Get Even More From Bustle — Sign Up For The Newsletter