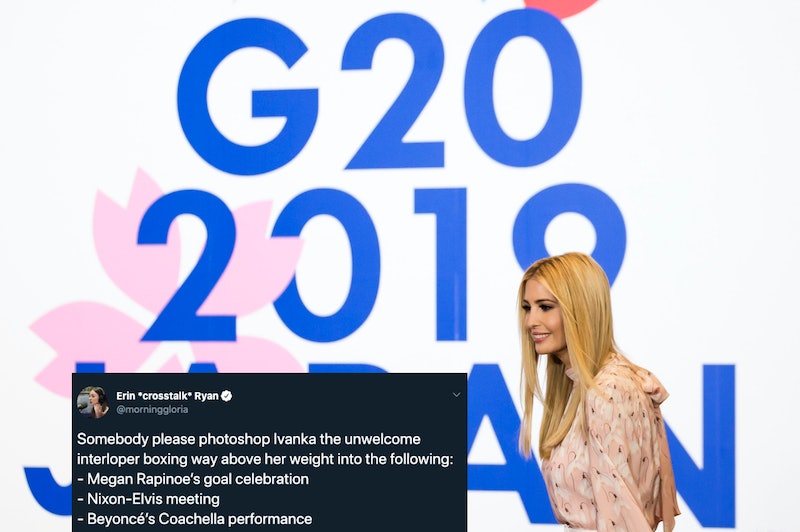 Trump family memes are back again. Over the weekend, a short video clip showing the president's eldest daughter engaged in a visibly awkward conversation with world leaders at the G20 summit in Japan went viral on Twitter. In response, users began photoshopping Ivanka Trump into historic photographs, using #UnwantedIvanka as a hashtag rallying call.

The video clip was first posted by BBC journalist Parham Ghobadi, Business Insider reports. It's short and lacks context, but shows Trump speaking — or attempting to speak — with people like Canadian Prime Minister Justin Trudeau and UK Prime Minister Theresa May, among others. But in the video clip, the leaders don't appear particularly interested in giving Trump any time to contribute to the conversation.

Trump is heard trying to make a point about gender inequality as it relates to "defense," but the video is too short to know exactly what she's talking about. The other leaders in the frame appear uncomfortable giving her too much attention — one person speaks over her, and another seems to avoid holding eye contact.

That short clip was the only thing that the people of the internet needed to launch a new meme trend, spearheaded by writer Erin Ryan. Now, doctored photos of Trump show the first daughter imposed on album covers, sitcoms, and even the moment Lyndon B. Johnson was sworn into the presidency.