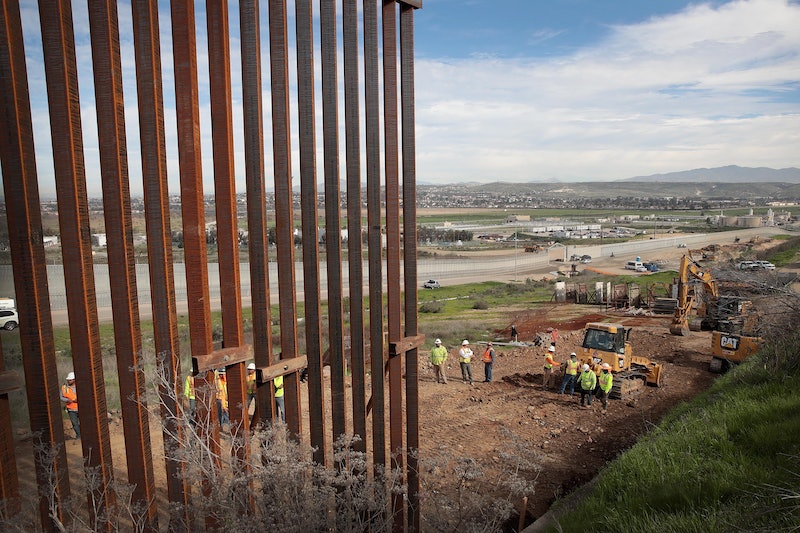 Last December, an initiative to crowdfund a new wall on the U.S.-Mexico border went viral. Although the campaign is still significantly short of its $1 billion goal, updates on the border wall GoFundMe plan show donors growing frustrated that the structure has not yet come to fruition, according to The Washington Post. The campaign's founder has said that he is purposely releasing few details about the wall project as a way to deter outside interference, according to public statements on his Facebook page.

Spearheaded by veteran Brian Kolfage, the GoFundMe campaign was originally envisioned as a way for supporters to donate money to the federal government to help pay for President Trump's border wall proposal. But earlier this year, Kolfage changed his plan for what to do with money raised as part of the campaign. Bustle has reached out to Kolfage for comment.

“Do you really think the Democrats in Congress will take the money you donated and put it toward the southern border wall? I doubt it," Kolfage said in a video update in January. "That’s why we are changing our mission from 'we fund the wall' to 'we build the wall.'"

In turn, he offered donors the option to divert their funds to a nonprofit that would help build the wall privately, or else they would receive a refund because the cause had technically changed. The Post reports that most donors opted to continue supporting Kolfage's plan.

Now, some supporters are growing frustrated that the project does not appear to have broken ground; the Post pointed to social media posts by unsettled backers.

On the We Build the Wall Facebook page, one person wrote that she wanted to see photos of the wall project under way. "I am very disappointed in you Brian Kolfage," the woman wrote. "Where are the progress photographs?"

For his part, Kolfage has said that the lack of information available about the wall project is intentional, and described the efforts to build a border wall as "in the home stretch."

"There’s no update because we are remaining silent for a very good reason," Kolfage said in a Facebook post on Saturday. "You all will have the best present very soon."

He added, "Remember powerful people want to stop our progress, so to not tip anyone off we are radio silent [sic]!"

On the updated GoFundMe, Kolfage claimed to have scoped out parts of the border that are particularly vulnerable to illegal crossings, but it is not clear where, exactly, those places are.

"One of the properties we are slated to build on is GROUND ZERO for illegal drugs, migrants and human sex slaves coming across, as you can see in the video above," Kolfage wrote on the initiative's GoFundMe page, which is still accepting donations. "Your money will have a direct impact to supplement where the government is not building a wall."

On his Facebook page, Kolfage said that news about wall construction would be released soon. However, it was not clear on Sunday when that news would come or what it would reveal.