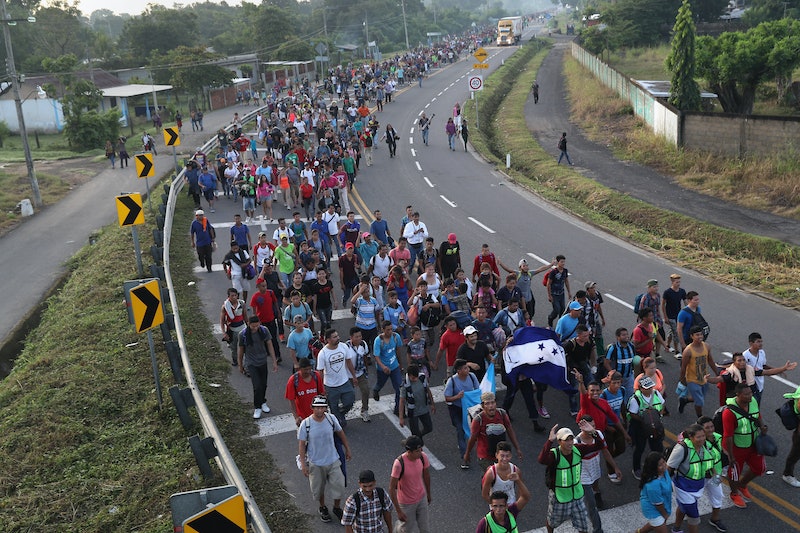 Approximately 3,000 people hoping to enter the United States are waiting in Tijuana for their turn to apply for asylum, according to the Associated Press. But updates on the migrant caravan indicate that the journey is far from over for the group. Many of those in the caravan have traveled thousands of miles to the US.-Mexico border, but some officials estimate that asylum-seekers may wait up to six months before they are able to submit their asylum applications.

In the interim, members of the caravan are reportedly facing increased hostility from locals, including from the mayor. Tijuana Mayor Juan Manuel Gastelum has said that the city is not equipped to handle the influx of migrants, many of whom are camping at an outdoor sports complex, per the AP. He has reportedly disparaged the caravan, remarking last week, according to NBC, that “Human rights should be reserved for righteous humans."

One of the main reasons that members of the caravan might end up waiting so long to apply for asylum is that, per the AP, U.S. border agents are only processing about 100 applications a day at the main U.S. entry point in Tijuana. But as the travelers wait their turn, tensions are reportedly heightening between the migrants and Tijuana residents.

“We didn’t come here to cause problems, we came here with love and with the intention to ask for asylum,” Carlos Padilla, a 57 man migrating from Honduras, told the AP. “But they treat us like animals here.”

Padilla also told the AP that a Tijuana resident yelled "migrants are pigs" at him as he was walking by. If his asylum application is rejected, he said he will most likely return to Honduras.

Speaking on a Mexican national television network last week, Mayor Gastelum stoked fears that the migrants were dangerous. “Some of them are a bunch of bums, smoking marijuana in the street, and attacking our families in Playas de Tijuana,” he said, according to The San Diego Union-Tribune. “Who is leading them?”

Comments like these have prompted criticism from organizations who seek to support the migrants. Enrique Morones, founder of the aid group Border Angels, accused Gastelum of racism, and compared his rhetoric to that of President Donald Trump's.

“How is it possible … that the mayor of this city says that immigrants are criminals, that they bring illnesses, that they’re dangerous? Those are Donald Trump’s same words," he told the San Diego newspaper.

In turn, some local Tijuana business owners told the AP that members of the caravan were panhandling and stealing. One furniture store owner said he was afraid that crime would increase while the migrants stayed in the city.

“There are a lot of expressions of xenophobia against them,” Victor Clark-Alfaro, a San Diego State University Latin American studies professor who lives in Tijuana, told NBC. "There’s a division in our society because there are more people who residents don’t want to be here."

Last Thursday, according to The San Diego Union-Tribune, a group of locals protested the migrants' presence in Tijuana. Tensions were so high that a confrontation reportedly broke out between some migrants and protestors in Playas de Tijuana, which the Union-Tribune describes as a "well-to-do" part of the city.

President Trump has railed against the migrants heavily, tweeting on Friday that the caravan was a "big con." As immigration remains an incredibly contentious issue in the United States, it's unclear precisely how the U.S. will respond to the asylum seekers in the coming months.