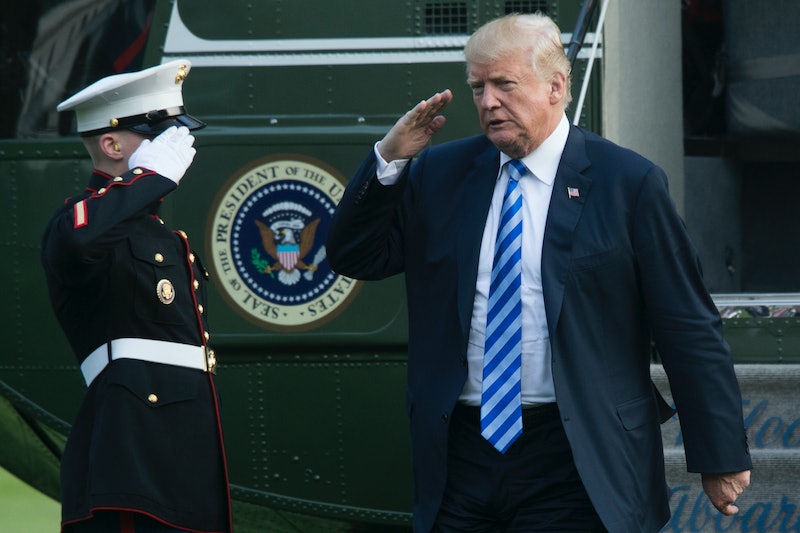 After more than a year of debate and lawsuits, the Trump administration will soon implement its transgender military ban, according to court documents filed Friday. The latest update to the president's ban on transgender people serving in the military came just one day after a federal judge in Maryland struck down the last injunction still standing against the ban.

"In light of the district court's decision yesterday to stay the preliminary injunction in Stone v. Trump … there is no longer any impediment to the military's implementation of the Mattis policy," documents filed in a Washington, D.C. federal court by Justice Department lawyers read. "Defendants therefore respectfully provide notice to the Court that the Acting Secretary of Defense plans to release a Directive-Type Memorandum (DTM) formally implementing the new policy in the near future."

Neither the notice nor the Pentagon have specified exactly when the ban would be implemented. According to The Hill, the Pentagon announced Thursday that existing policy, which allows transgender people to openly serve in all branches of the military, "will remain in effect" until "further guidance" was issued "in the near future." What's more, Pentagon spokesperson Jessica Maxwell said the Department of Defense was "pleased with the district court's decision to stay the final injunction against the department's proposed transgender policy."

On Thursday, U.S. District Judge George L. Russell III moved to rescind an injunction he had previously issued against the ban, stating in his ruling that he was bound to abide by a Supreme Court ruling issued earlier in the year. "The court is bound by the Supreme Court's decision to stay the preliminary injunctions in their entirety," The Washington Post reported Russell wrote in his ruling.

In January, the Supreme Court lifted two injunctions blocking the transgender ban from taking affect. While the court had refrained from commenting or ruling on the legality of the policy, their ruling effectively allowed the Trump administration to implement the policy while a series of lawsuits challenging the ban continue to play out in lower courts.

The American Civil Liberties Union (ACLU), which filed the case in Maryland on behalf of six transgender military members, has vowed to continue its fight against the transgender military ban, according to the Hill. "Each and every claim made by President Trump to justify this ban can be easily debunked by the conclusions drawn from the Department of Defense's own review process," The Hill reported senior ACLU LGBT & HIV Project attorney Joshua Block said in a statement. "Our clients are brave men and women who should be able to continue serving their country ably and honorably without being discriminated against by their own commander in chief."

After some trial and error, the Trump administration rolled out a revised ban on transgender people serving in the armed forces in March 2018. According to CNN, that policy disqualified "transgender persons with a history or diagnosis of gender dysphoria — individuals who the policies state may require substantial medical treatment, including medications and surgery" from military service "except under certain limited circumstances." Exceptions are made for those who began serving in the military as a transgender individual prior to the memo and for transgender people who can show they have been "stable for 36 consecutive months in their biological sex prior to accession."

In implementing the ban, the Trump administration is likely to impact thousands of military service members. According to The New York Times, the Department of Defense has said there are nearly 1,000 officially recognized transgender troops serving in the military with more than 200 currently going through enlistment.