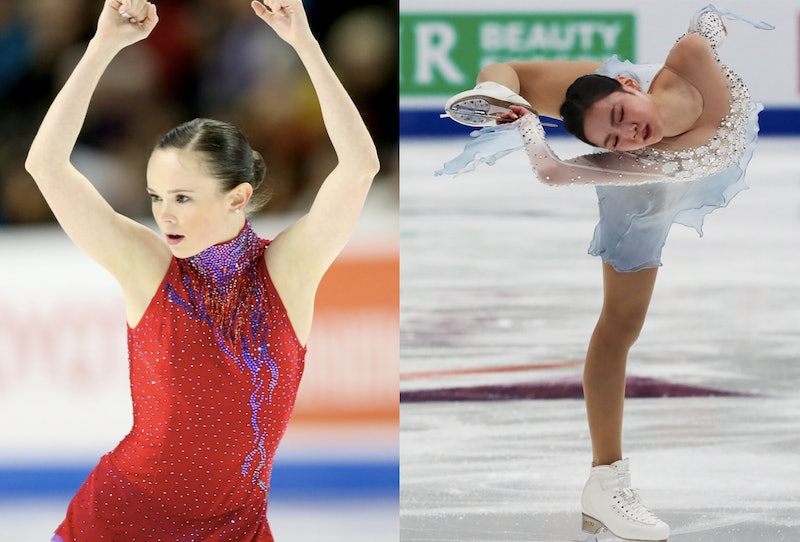 On Wednesday, the ice skating community — and Twitter at large — erupted in response to news of an allegation centered around two figure skaters at the World Championships in Japan. U.S. figure skater Mariah Bell was accused of slashing a rival, Korean skater Lim Eun-soo, when the two skaters were on-ice during a rehearsal period for the women's short program, per The Washington Post. The complaint came from Lim's management — and they went so far as to allege that Bell has been bullying Lim for a while now, according to Korean pop blog All-K Pop.

News of the complaint was first reported by All-K Pop, which acquired a statement, saying, "Lim Eun-soo was skating close to the edge as much as possible to not interfere with other skaters. It seems it was intentional, considering how Bell came from behind."

Another rep for Lim told Korean website Nate, "Bell has always tormented [Lim] Eun-soo. I used to think that we should just ignore it, but it was really bad before the contest." Neither Bell nor Lim has made a public statement about the matter.

In response to the complaint, the International Skating Union (ISU) released a statement a day later, which reads:

The incident was verbally reported to the ISU by the Korean Team Leader [...] however no formal complaint has been received. Based on the evidence at hand at this point in time, which includes a video, there is no evidence that Ms. Bell intended any harm to Ms. Lim. The ISU met with delegates from both USA and Korea and urged both parties to find an amicable solution. The ISU maintains that this remains the appropriate approach.

Additionally, an ISU rep explained in a statement that Lim's parents had also brought up the alleged incident to the ISU, per The Washington Post. The rep added, “It is hard to tell [what happened] just by watching the video footage of the incident.”

Lim and Bell are both still competing in the World Championships, which take place through March 24.

On Wednesday night, ice skating star Adam Rippon weighed in on the drama. Rippon has worked with Bell in the past on the choreography within her performances, according to a profile of the pair for U.S. Figure Skating. He tweeted in response to someone who had shared a link about the alleged incident, writing:

This article is click bait. I’ve been to the rink multiple times and NO ONE has been bullying anyone. Stop creating sh*t and spreading rumors. What happened in the warm up was an accident. Don’t distract both Eunsoo and Mariah from the competition.

According to The Washington Post, both Lim and Bell train under the same coach, Rafael Arutunian, and are based in Los Angeles. What's more, the publication reports that this is 16-year-old Lim's first Senior World Championships.

The Post further notes that Lim did compete in the event, despite the injury sustained, and scored a personal best to place fifth overall in the short program. She came in just over Bell, who placed sixth.