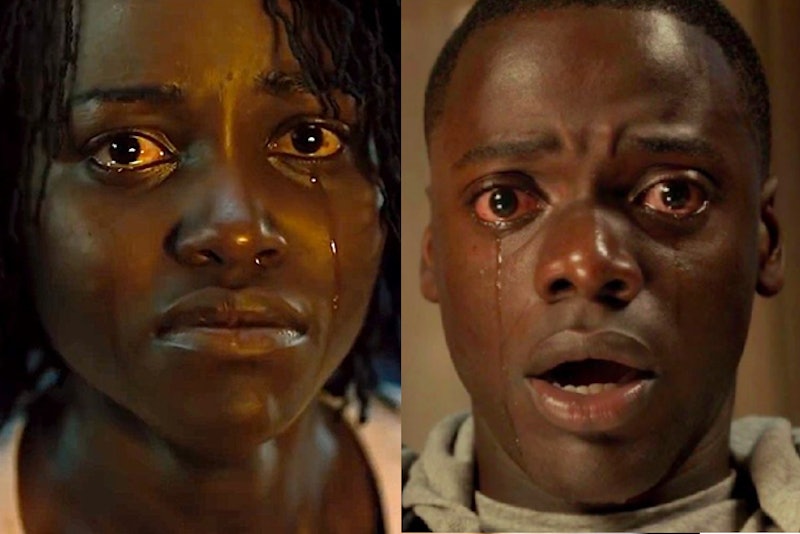 Jordan Peele's debut feature Get Out had the kind of crossover success that genre pictures (forget horror films) rarely get — it was a hit with audiences and critics and earned Peele an Oscar for Best Original Screenplay. His second film Us is about to drop on Mar. 22, and while details have been kept under wraps, one thing is clear from its creepy trailer: it's definitely another horror film. Back-to-back horror movies from someone who was previously known for television comedy might suggest a direct link, but Us isn't connected to Get Out. The films may share scares and a writer/director, but don't expect any characters or plots from Get Out to return in this new movie.

Now that the film's had its premiere at SXSW, Peele has lately been a little more forthcoming about what's in store for audiences. Speaking to The Guardian, he noted that the emotional of releasing each film has been different for him. "With Get Out, I had the fear that if it went wrong, it would go terribly wrong. I don’t have that fear with this movie, but of course there’s the fear of betraying the expectations of somebody who wants, essentially, Get Out 2, and what happens when they realize this is a very, very different movie," he said. So does that mean there's no connection at all between the two stories? "Without answering directly if they’re in the same universe, I will say that, yes, I consider this part of the same project," he said.

While some interpreted this comment to mean that both films are linked cinematically, it's more likely that Jordan's "project" isn't an interconnected universe along the lines of Marvel, but something akin to Universal's original '30s and '40s run of horror films, where audiences came to expect entertaining, macabre frights from a studio consistently releasing unique tales of terror, each a new facet of fear reflecting different societal woes and concerns. Universal Studios recently tried to turn their range of classic monsters, including Frankenstein, The Wolf Man, Dracula, The Invisible Man, the Mummy, and The Creature From The Black Lagoon, among others, into a connected Dark Universe to compete with Marvel, but the idea seems to have died, per an interview Alex Kurtzman gave to The Hollywood Reporter earlier this year. Could this be the beginning of the Peele Cinematic Universe?

In Us, a family is beset upon by creepy doppelgänger versions of themselves when they go away to their vacation home, though it's unclear from trailers who they are and what exactly they want.

Peele told Entertainment Weekly, "I think the main idea that went into writing [Us] is that we’re our own worst enemy, and that idea created this monster, The Tethered. I wanted to forge this new mythology that explored our duality and the duality of the characters," citing films "Dead Again, The Shining, The Babadook, It Follows, A Tale of Two Sisters, The Birds, Funny Games, Martyrs, Let the Right One In, and The Sixth Sense" as direct inspirations. In conversation with The Daily Beast, he talked about the influences went into Get Out. "Two of my favorite movies are Rosemary’s Baby and The Stepford Wives," Peele said. "The way that those movies deal with gender and are ultimately about men making decisions for women’s bodies — and address justified fears from the women’s lib movement — was a signal to me that you can also do a movie about race using the same model."

Speaking to Rolling Stone, the filmmaker clarified that Us, on the other hand, is not a movie about race — at least not in the same way that Get Out explicitly is. “I realized I had never seen a horror movie of this kind, where there’s an African-American family at the center that just is. After you get over the initial realization that you’re watching a black family in a horror film, you’re just watching a movie. You’re just watching people. I feel like it proves a very valid and different point than Get Out, which is, not everything is about race. Get Out proved the point that everything is about race. I’ve proved both points!”

It's unlikely that the Us antagonists, The Tethered, will ever appear in The Sunken Place, or that there will ever be a connection more direct between Us and Get Out than Peele using each project to examine different American fears. (It's no coincidence Peele's next major project is rebooting that most famous anthology of modern neuroses: The Twilight Zone.) The strongest link between films, then, is right there in the seats, in the audience looking into their own macabre reflections and loving what they see.