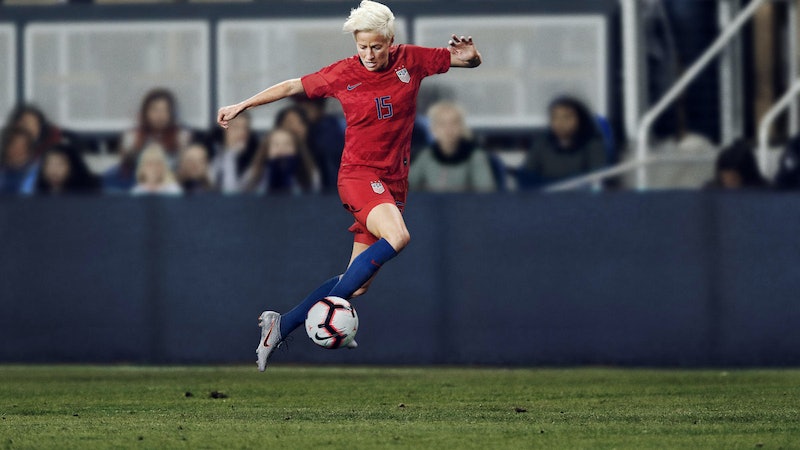 When 28 members of the United States women's national soccer team filed a lawsuit against the United States Soccer Federation earlier this year, the timing seemed appropriate. Not only had the team been fighting for pay equality via lawsuits since their World Cup win in 2015, but it just so happened to be International Women's Day when news of the latest suit broke. Whether the timing was intentional or not, the team sent a clear message — the defaulted response that "men are better to watch" is no longer good enough. They are good enough, and they aren't about to settle for anything less than what they deserve.

While the previous battle focused mostly on their paychecks, the women's national team is now expanding their grievances to include everyday discrimination. From whether or not they play on artificial turf or grass, to how often they play, and the medical attention they receive, the team is ready to address all levels of inequity that affect their game.

For Megan Rapinoe, forward and co-captain of the U.S. Women's National Soccer Team, these discrepancies have been part of her career from the very beginning. "Traveling overseas, sitting in economy and knowing knowing the men always travel overseas and they fly first class, the different hotels, [and the fact] that we stay in playing on turf all the time [are some examples]," she tells Bustle at a press event for Nike where the latest Word Cup jersey kits were revealed. "We don't anymore because we actually had to cancel a game because the turf was so bad."

She says on top of the obvious pay discrepancies, the team's fight against injustices is about reading between the lines and looking to see if games are being invested in equally, how much marketing and promotion there is of games, and how many women have brand sponsorships compared to the men. When making those comparisons, the women's teams were still coming up woefully short, and it's perpetuating a notion that not investing in women's sports is justified.

But the argument that "women aren't as fun to watch" is starting to become a moot point. According to the New York Times, the 2015 women's World Cup final was the most watched soccer game in U.S. history — 25.4 million people tuned in to watch the U.S. victory over Japan. But if visibility and viewership is what it takes to achieve equity, there is still a ways to go. The Tucker Center for Research on Girls & Women in Sport found that, though women represent 40 percent of all participants in sports, they only represent four percent of media coverage. Al Jazeera also reports that 99 percent of all sponsorship money goes to men, with Serena Williams being the only female in the top 100 highest-paid athletes in the world.

But some brands are starting to challenge the idea that sports has to be a male-dominated industry solely targeting male viewership. For example, Nike's most recent "Dream Crazier" campaign shines a light on sexist double standards in sports, which does something incredibly unique — not only is the sports apparel brand marketing directly to women, they're calling out the difficulties women face within sports. In 2017, Gatorade's "Sisters In Sweat" campaign featured Serena Williams talking to her newborn daughter, encouraging her and all women to stay in sports as a source of strength.

"You look at branding agencies that are starting to catch on very quickly," Rapinoe says. "You've got a huge share of the market controlled by women, whether because we're the buyers of the house or just that we're half of the population. So why wouldn't you brand directly towards women or cater directly towards women in all of these different ways?"

In Rapinoe's opinion, making women a target audience is just one piece of the puzzle that can push the momentum forward for women's sports overall. The second is to simply show up and spread the word.

"Continue to tell people about it and talk about it," she says. "If you are a hater and you've never been to game, then [...] go to the game and just watch. And then if you really truly have watched a number of games, and you hate it, then you don't have come."

As Rapinoe says, it all boils down to a choice. If the sports industry chooses to champion men's sports over women's by putting money, viewership, and representation behind them, the scales are obviously tipped in their favor. "You're just choosing one team over another, it's not really about who's popular, and who's not."

But for Rapinoe, being a female soccer player isn't just an uphill battle to do what she loves on fairer terms. She finds herself at an interesting moment in history where she can spearhead a change not just in this traditional part of American culture, but in cultural attitudes toward women overall.

"I think we're at such an incredible moment to be at the forefront of all this and to be able to be leaders in the community and to be able to [...] just stand with the Times Up movement and stand with the Me Too movement, and stand with all these other women fighting to break that glass ceiling and achieve pay equity," Rapinoe says. "It's inspiring to be able to be in proximity of all of that and all of these inspiring women, the people that we've been able to meet along the way and the gains that we've been able to make, it really is a transformational time."

Rapinoe says she feels hopeful when looking at her career's trajectory— things have changed a lot since she first started, and she's proud to be a part of something bigger that was able to engineer that change. And other women in sports are listening. The New York Times reported that after the U.S. women's team went public with their pay discrimination lawsuit, other teams from around the world, often in other sports, reached out to help fight for similar gains. The team has become a leader and an example in the space of what collective bargaining for women can look like, The New York Times states.

And Rapinoe says that though future female athletes will inherent vestiges of these problems, they have opportunities to break similar ground.

"[Being a female athlete] is really is an opportunity to do something bigger than yourself, and to [...] move the needle, and in so many ways," she says. "It's very inspiring to see that change happen in the world as you're happening with it."

More like this
Here's How To Support Jewish People Amid Rising Antisemitism
By Hannah Orenstein
MOBO Awards Found Kanya King On The Woman Whose Grit & Determination Spur Her On
By Kanya King
Prince William Condemns “Unacceptable” Comments Made To A Black Guest At Buckingham Palace
By Shahed Ezaydi
69 Great Gifts For Guys No Matter What Their Hobbies Are
By Teresa Newsome, Mia Mercado and Brittany Leitner
Get Even More From Bustle — Sign Up For The Newsletter