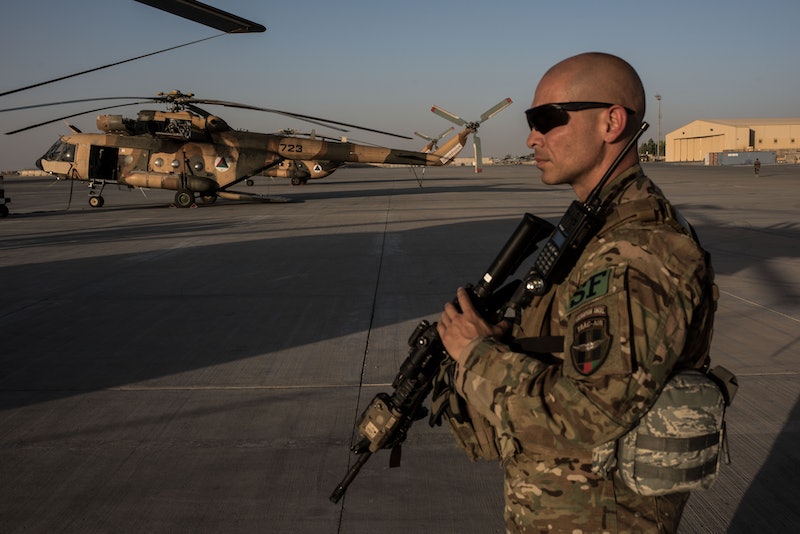 A new poll conducted by the Military Times revealed that U.S. military troops rate white nationalism a bigger national security threat than Syria, Iraq, and Afghanistan — and that one in four troops say that they have witnessed examples of white nationalism among their fellow service members.

The Military Times poll was conducted a week after a white supremacist rally and attack on counter protesters in Charlottesville, Virginia, on Aug. 12. The voluntary survey included 1,131 responses from active-duty troops. Those polled were predominantly white and male, at 86 percent and 76 percent of respondents, respectively.

According to the poll, 30 percent of respondents noted that they viewed white nationalism as a threat to national security. This number indicates that, according to the survey, troops are seemingly more concerned about the threat posed to the U.S. by white nationalism than by a variety of other foreign threats, including Syria (which 27 percent viewed as a threat), Pakistan (25 percent), Afghanistan (22 percent), and Iraq (17 percent).

60 percent of the troops interviewed also said that they would support activating the National Guard or reserves to manage civil unrest arising from white nationalist activities, such as the Charlottesville incident.

However, the Military Times also noted that not everyone shared the notion that white supremacy poses a threat, with one respondent writing that “White nationalism is not a terrorist organization." Moreover, others (nearly 5 percent of respondents) left comments in the survey to complain that other groups, like Black Lives Matter, were not included in the survey as options for threats to national security (the Military Times did note that it had included “U.S. protest movements” and “civil disobedience” as options).

The results of this survey are enlightening, especially since President Donald Trump has often been accused of emboldening white supremacists. Indeed, following the Charlottesville attack in which one woman was killed when a vehicle drove into a crowd of counter protestors at the white nationalist rally, Trump was condemned for his rhetoric blaming "both sides" for the tragedy. In an article describing Trump's actions and rhetoric following the tragedy, the New York Times noted that Trump had given white supremacists "an unequivocal boost."

In contrast to Trump's response to Charlottesville, U.S. military chiefs overtly condemned racial hatred and extremism. Gen. Robert B. Neller, the commandant of the Marine Corps, tweeted after the tragedy: "No place for racial hatred or extremism in @USMC. Our core values of Honor, Courage, and Commitment frame the way Marines live and act. Gen. Mark Milley, the army's chief of staff, also tweeted: "The Army doesn't tolerate racism, extremism, or hatred in our ranks. It's against our Values and everything we've stood for since 1775."

The vehement denunciation of extremism and racial hatred by military higher-ups back in August, coupled with the results of this new survey, indicate that the military very much views white supremacy as a substantial problem — one that many service members indicate is more of a threat to the United States than a variety of long-held foreign enemies. Many are likely closely watching to see if the Trump administration will heed these concerns — and if or how it will respond.