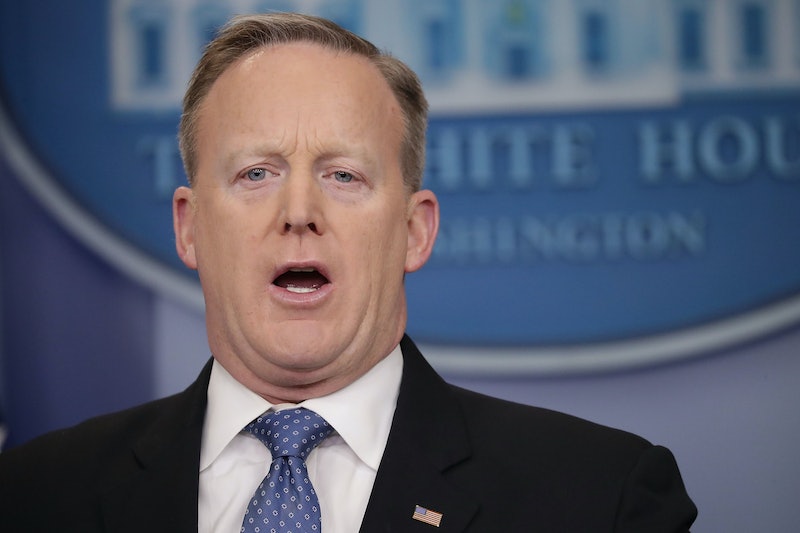 Sean Spicer has only been White House Press Secretary for three weeks, but it's been a tumultuous three weeks. He was mocked for devoting the entirety of his first press conference to the question of how many people attended Donald Trump's presidential inauguration, and his nonsensical but vociferous defenses of Trump eventually made him a whipping boy on Saturday Night Live. The pile-on continued Sunday, when US Weekly tweeted Spicer with a little bit of investment advice and a whole lot of shade.

The backstory here is that on Friday, the Washingtonian reported that the White House had interviewed former Navy SEAL and prominent Trump supporter Carl Higbie as a possible replacement for Spicer. Spicer responded the next day, quipping that "getting government updates from @washingtonian is like getting stock tips from @usweekly."

Spicer's tweet was premised on the idea that, as an entertainment magazine, US Weekly isn't qualified to give good stock tips — and, for some reason, we therefore shouldn't believe rumors that the White House is interviewing people for Spicer's job. However, the folks at US Weekly (or at least, those who run the magazine's social media accounts) quickly weighed in, and took a bit of the wind out of Spicer's sails.

"Thanks, Spicey!," the company wrote. "@usweekly does not recommend investing in individual stocks. Stick with a broad mix of low-cost index funds."

But there was another burn in that tweet, one that was more subtle but possibly more damaging than the jab about the stock market. US Weekly referred to Spicer as "Spicey," which is the nickname Melissa McCarthy uses during her unforgettable impressions of the press secretary on Saturday Night Live. That matters more than it may seem: According to a POLITICO report, the White House is none too happy about McCarthy's Spicer impression, and reportedly, Trump was most angry about the fact that that his press secretary was being portrayed by a woman.

In this context, the US Weekly tweet serves two purposes: It demonstrates that Spicer's quip about stock tips was poorly thought out, but also indicates that McCarthy's depiction of Spicer is playing a role in shaping the public's perception of the press secretary. That's the last thing Trump wants — and by extension, it's probably not great news for Spicer, either.