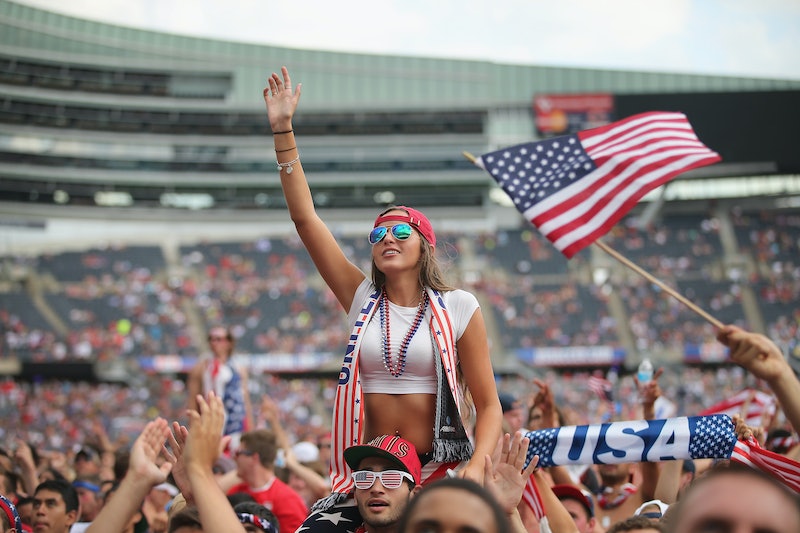 The World Cup is coming to North America for the first time since 1994. On Wednesday, the International Federation of Association Football (FIFA) voted to allow the continent's three largest countries to host the 2026 tournament together. FIFA rarely chooses multiple nations for the job, so soccer fans are probably wondering how the United States co-hosting the World Cup with Mexico and Canada will work.

The countries will take turns accommodating games over the course of the competition, which will include 48 teams and 80 matches. The tournament will take place over a 32-day period (over two weeks longer than the recent Olympic games, which took place in just a single city, PyeongChang).

It has not yet been announced which cities will host which matches, but the United States is set to take 60 of them, The New York Times reports, including all of the games during and after the quarterfinals. New Jersey's MetLife Stadium — which can fit 87,000 people — may house the final. Mexico and Canada will each take 10 matches.

The World Cup has only had co-hosts one other time in history: Japan and South Korea shared the task in 2002. The two nations spent billions of dollars to prepare, going on what The New York Times reported was "the biggest stadium building spree in the Cup's [...] history" up until that point. But all of the stadiums needed for the North American World Cup in 2026 already exist, as well as many of the facilities required for training, housing, and other needs.

It will be the first time that the competition has been hosted by three countries, but appropriately, it's also going to be the biggest World Cup yet. Last year FIFA voted to expand the number of participating teams from 32 to 48, which will mean more stadiums, more players, and more fans. The tournament's duration has not changed.

North America had only one contender, Morocco, which placed its bid at the final moment last August. Ultimately, FIFA made a choice that seemed financially motivated. The United States, Mexico, and Canada estimated that they'd make $14.3 billion in revenue and a record $11 billion profit for FIFA. Morocco, on the other hand, said that it could only bring in a revenue of $7.2 billion.

FIFA saves some of its profits in a cash reserve for insurance in case the tournament ever needs to be canceled, but reinvests most of it into the game. Carlos Cordeiro, the president of the United States Soccer Federation, said last month that North America's projected World Cup profits "could mean 50 million more [invested] per association."

For its part, Morocco argued that the bidding process shouldn't prioritize profit. "The United Bid is proposing an offer that is mainly a business proposal for football," said Moroccan official Moncef Belkhayat on Monday. "Their offer is based on dollars, on profit, while Morocco is offering an offer that is based on passion for football, for development of football — not only in Morocco, but also in Africa."

But profit did win in the end, despite a recent concern that emerged about the North American bid. Last month President Donald Trump sent a tweet that seemed to defy FIFA ethics rules; he implied that the United States would consider punishing countries that voted for Morocco.

"It would be a shame if countries that we always support were to lobby against the U.S. bid," he tweeted on April 26. "Why should we be supporting these countries when they don't support us (including at the United Nations)?" His words caused a FIFA spokesperson put out a reminder statement about its Rules of Conduct, which prohibit coercion in the bidding process.

The North American World Cup will take place sometime in the summer of 2026. For now, all eyes will return to the 2018 tournament, which begins on Thursday in Russia.