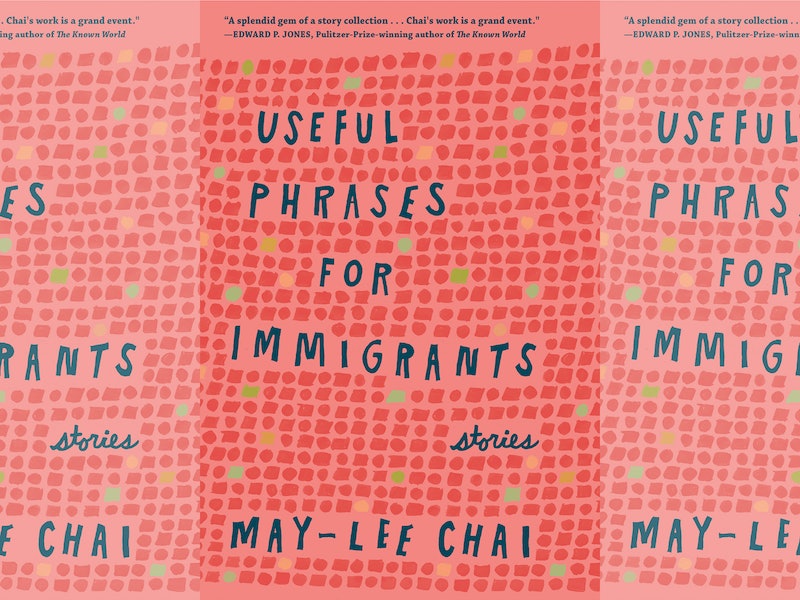 At the beginning of Useful Phrases for Immigrants, author May-Lee Chai dedicates her book to her father, Winberg Chai. It proves an especially fitting acknowledgement, since the eight fiction stories inside touch on family in one way or another. In taking us through the stories of various families, Chai explores complex family dynamics and also the struggles of migrant, immigrant, and Chinese-American families.

“Chinese families are really important to Chinese people,” Chai tells Bustle. “It's kind of a basic organizing principle of life.”

Chai, an assistant professor in Creative Writing at San Francisco State University and the author of 10 books, writes about the relationships between her characters with heartbreaking honesty. In “The Lucky Day,” Rose drives overnight to visit her mom in another state to wish her a happy birthday. Dealing with a serious illness and living with her son, Sam, her mother asks that Rose to take her to the races. In an unflinchingly intimate moment, Rose reflects on her mother’s temperament, her condition and her mortality:

“Far from home, in Rose’s memories, Ma had become like a black-and-white movie that she had watched on TV when she was a kid. Flickering and quaint. Up close in real life, Ma burned like a live coal against Rose’s heart.”

This immediacy runs through many of the stories; Chai captures the love, frustration, anger, disappointment and more that seeps through these family relationships: There’s the woman who is trying her best to live with her in-laws until she can no longer bear it; there's the young daughter reeling from the discovery of her mother’s affair; and there's the young boy who appears docile and humble in front of his grandpa but leads a very different life on the city streets. In many ways, these characters seem to lead double lives — but maybe that’s just what being part of a family is all about, according to Chai.

The book also takes a close look at “different structures of families” in order to also shed light on the ramifications of globalization. Chai describes, for instance, the “left behind children.” Parents who leave their villages to go work in “big mega factories” are often told they can’t bring their children, so they sometimes leave them to be raised by their grandparents. This, Chai explains, creates an “emotionally very unsatisfying situation for the children.”

This is the premise of the story “Fish Boy,” in which a young boy attempts to adjust to city life in Zhengzhou, China and to his new job at a restaurant. But he also must adjust to the perils of the streets, including a gang of boys who find him to be an easy target. In time, the boy finds a solution: he leads his own group of troublemakers.

While the story reflects on the act of growing up quickly as a means for survival, it also reflects on larger issues of labor, globalization, class, and race. "Fish Boy" isn't just a story about a boy's need to fit in; it shows what happens when a kid "straight off the farm" is thrown into a new life because his parents have been forced to leave him behind to find work.

Fittingly, Chai began writing these stories before the presidential election took place, and saw them take on an even greater importance as vitriol against China saturated the media. Her stories show how the “hopes and fears of the Chinese are impacted by these global trends.”

Even with their universal themes — of complicated romantic relationships, homophobia within families, pubescent awkwardness — the stories also demand that readers examine the impact of social and political structures on immigrant families. The word for nation in Chinese, Chai explains, “actually means state plus family.”

And so many members make up that family unit, some more readily than others. Useful Phrases for Immigrants takes us from childhood to adolescence to marriage to old age in order to explore how this unit works.

“I definitely wanted to pick from the spectrum I wanted migrants within China, I wanted immigrants leaving China,” says Chai. “I wanted different age groups.”

Telling these stories, in all their complexity, proves important to Chai as she reflects on her own childhood. In remembering her favorite books growing up, Chai points out the lack of books that Asian-American readers could relate to easily. In her work own, she strives to fill in that gap.

“The nightmare is always that there’s one story and then your family — or you — are compared to it,” says Chai. “I would hope that Asian American readers would appreciate the diversity of the different characters… and feel that there is space for their own story to be told as well.”