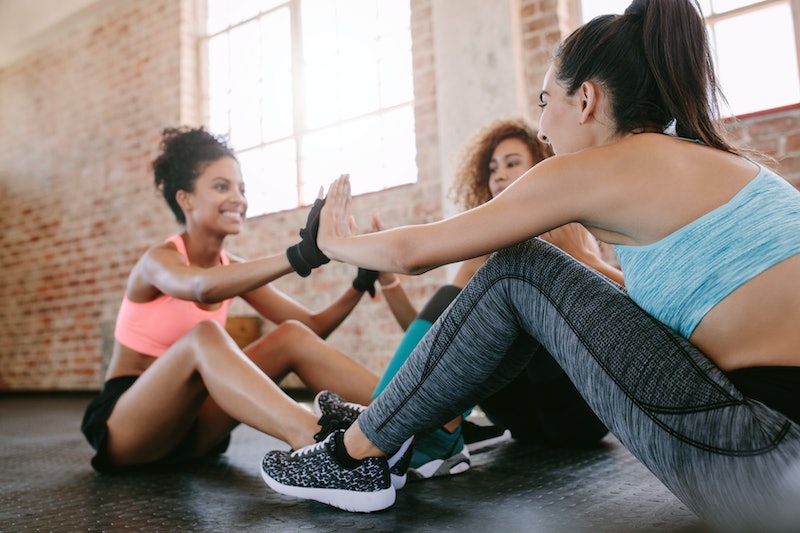 Cannabidiol, aka CBD, is having a moment right now, and for good reason. Not only does it have some general health benefits, such as being anti-inflammatory and anti-anxiety, research is starting to suggest that using CBD while working out can help you recover faster. According to U.S. News & World Report, CBD can be an effective way to relieve the inflammation and pain caused by exercise. CBD comes in topical creams, capsules, sprays, and more, and can be used after your workout to help you feel less stiff and sore, Esquire reports.

Dr. Alan Beyer, sports medicine doctor and executive medical director of the Hoag Orthopedic Institute in California, told U.S. News and World Report that he has seen a dramatic increase in older adult and college-aged athletes taking CBD edibles and using CBD oils because they believe CBD will promote muscle growth, though there's little research to suggest this. Dr. Beyer also told U.S. News and World Report that CBD might be a promising substitute for NSAIDs like Ibuprofen, which can cause kidney damage, to relieve pain from exercise-related injuries.

Stuart Titus, president and CEO of Medical Marijuana, Inc., told Men’s Health that his experience as a physical therapist is what led him to advocate for the use of CBD to treat pain and inflammation in athletes. Titus’ research on CBD comes straight from the U.S. Department of Health and Human Services. "It actually mentions very specifically that the non-psychoactive cannabinoids like CBD are more preferable to use because you can give larger doses without any of the intoxicating or negative side effects,” Titus told Men’s Health. CBD doesn’t have any psychoactive effects because it contains negligible amounts of THC, the cannabis compound that's responsible for the "high" associated with marijuana, according to Medical News Today.

However, we still don’t know what the long-term effects of using CBD, so more studies need to be done to evaluate the safety of using it for extended periods of time, U.S. News & World Report says. "CBD for exercise-induced inflammation is absolutely the next big area we need to explore," Thorsten Rudroff, an exercise scientist and director of the Integrative Neurophysiology Laboratory at Colorado State University and the Frontiers in Neurology study co-author told U.S. News & World Report. "However, most of what we know about CBD and exercise is based on anecdotal reports. There's basically no research on the topic.”

So if you want to try CBD to boost your workout, how do you get started? First of all, make sure it’s legal where you live. There are six states where CBD oil is illegal, according to CBD School. However, according to Esquire, if CBD is legal in your state, it can be sold over the counter. Because CBD is a compound found in cannabis, it's possible that it may contain some THC, which may show up positively on a drug test. To get the most out of the anti-inflammatory effects of CBD, Dr. Jordan Tishler, Harvard physician and president of InhaleMD and the Association of Cannabis Specialists, told PopSugar to use a large dose and make it a consistent part of your post-work out routine, along with stretching and other recovery tactics. Oh, and drink water, too.