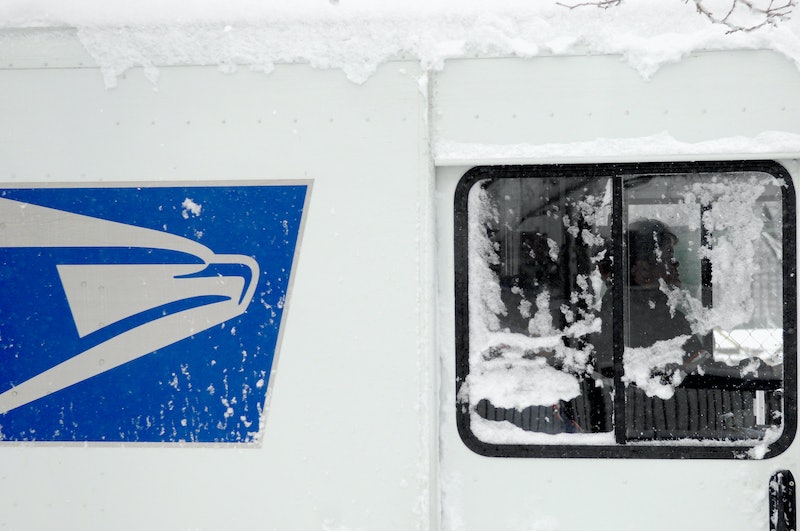 Extreme temperatures in the Midwest have been touted as colder than Antarctica — where it's always cold, but technically summer right now — and midwesterners have filled social media with screenshots of their phones' weather apps. But the real sign that the temperature has gotten out of control is that letter carriers will not be delivering mail in some of the coldest areas. That's right, on Wednesday the USPS suspended mail delivery because it's so darn cold, as USA Today reports.

The U.S. Postal Service announced the move on Twitter, noting that it was taking the step to "ensure the safety and well-being" of employees. It included a link that detailed where mail delivery would be suspended on Wednesday, including parts of Illinois, Indiana, Michigan, Wisconsin, Ohio, Iowa, Minnesota, the Dakotas, and Nebraska. You can see if your mail will be disrupted by checking the first three digits of your ZIP code on the postal service's page.

The USPS noted the "arctic outbreak" in its announcement and said that some delivery areas "could see wind chill readings as low as 60 below zero." USPS spokeswoman Kim Frum told NPR that "employee safety is a top priority for the Postal Service and this decision was made for their safety." USA Today reports that some retail outlets will remain open — even in areas with suspended deliveries.

According to a Q&A section on the U.S. Postal Service's website from 2013, the delivery of mail is usually only stopped when the access to a mailbox is unsafe due to ice or snow. But it provides a lot of flexibility to keep letter carriers safe. "While our goal is to deliver the mail, we stand by the decisions of local managers and/or carriers when delivery is suspended due to an immediate, serious safety concern — particularly during changeable weather conditions," the page reads.

RTV6 Indianapolis reported that in areas where postal workers were delivering mail, there would be talks about frostbite and ways to prevent it, such as taking breaks and wearing the proper clothing.

TIME magazine noted that the suspension on Wednesday tested the unofficial motto of the USPS. "Neither snow nor rain nor heat nor gloom of night stays these couriers from the swift completion of their appointed rounds," is chiseled above the entrance to a main New York City post office.

The text originally comes from Greek historian Herodotus' The Persian Wars but is assumed by many to apply to the American mail service. "The popular belief that Herodotus’s description of the Persian postal service was about USPS is a tribute to the men and women who have delivered mail reliably and dependably, through all conditions, for centuries," a USPS blog on the motto reads.

USA Today pointed out the official mission statement, which doesn't focus as much on weather but still provides a commitment: "The Postal Service shall have as its basic function the obligation to provide postal services to bind the Nation together through the personal, educational, literary, and business correspondence of the people. It shall provide prompt, reliable, and efficient services to patrons in all areas and shall render postal services to all communities."

Though weather interruptions are unusual, The Detroit Free Press reported that the last suspension of mail delivery was just last month. After the passing of former President George H.W. Bush, there was a national day of mourning.

There's no word yet on when deliveries will resume, but it's safe to say temperatures will need to rise first.