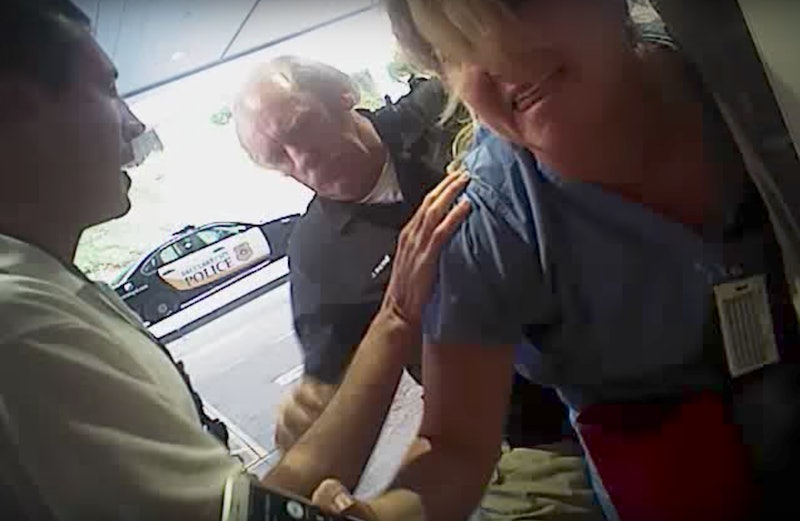 According to the Associated Press on Tuesday Salt Lake City Police fired the officer, Jeff Payne, who was filmed dragging a Utah nurse out of a hospital in July for doing her job. The nurse, Alex Wubbels, had refused to let him take blood from an unconscious patient without a warrant, and footage of the exchange showed that he reacted by placing her in handcuffs and forcibly removing her from the building.

The video went viral after Wubbels went public about her mistreatment, fearing that not enough was being done to prevent further instances of abuse. The Associated Press reported that the city's police chief, Mike Brown, decided to fire the officer, Detective Payne, on Tuesday after an investigation into the incident was completed.

The officer's lawyer called the firing unfair, cited his 27-years on the force, and questioned if firing him was a fair punishment. But Brown was unequivocal in his letter of termination:

You demonstrated extremely poor professional judgment (especially for an officer with 27 years of experience), which calls into question your ability to effectively serve the public and the department.

Chief Brown went on to tell Payne he was "deeply troubled by your lack of sound professional judgment and your discourteous, disrespectful, and unwarranted behavior, which unnecessarily escalated a situation that could and should have been resolved in a manner far different from the course of action you chose to pursue." Payne's boss, watch commander, Lt. James Tracey, was also demoted as a result of the incident.

The Salt Lake Police Department, in addition to firing Payne, has already put policy changes on blood draws into effect as a result of the incident. They now match hospital policy that there must be a warrant or a conscious patient who gives their consent. An updated version of the police manual uploaded this week to the department's website has detailed instructions on how to interact with hospital staff for blood draws and more.

Payne was allegedly working off an outdated policy. The University of Utah Hospital also changed its policy so that officers are not allowed to interact with nurses and must see a supervisor.

Also of note in this case is Salt Lake City's focus on police de-escalation training. Earlier in 2017 the police department noted to news media that it had tried to get officers to refrain from deadly force. "The Salt Lake City Police Department is probably one of the leading agencies in the country as far as how we train and deploy and use these tactics to deescalate and save lives," Chief Brown told a local TV station earlier in the year.

One of the ways that they reportedly try to do this is by training officers to slow down so that they have time to rethink their approach. Of course this incident is different in that Payne did not have his firearm drawn, but the calm headedness training did not seem to help the office while he was at the hospital in July. From June 2016 to roughly May 2017, there were 37 instances of deescalation, according to local news, and yet the problems with police brutality in Salt Lake City remain in the news.

Besides the rough treatment of Wubbels, the city's police has come under fire for the fatal shooting of Patrick Harmon in August. Body cam footage clearly shows that he was shot as he ran away from police. He was stopped by police for riding his bicycle across several lanes of traffic without a rear tail light. Police claim he threatened them with a knife; Harmon's family says he had issues with bipolar disorder and schizophrenia.

The department may have put a focus on deescalation but both these instances show that their work is far from over.