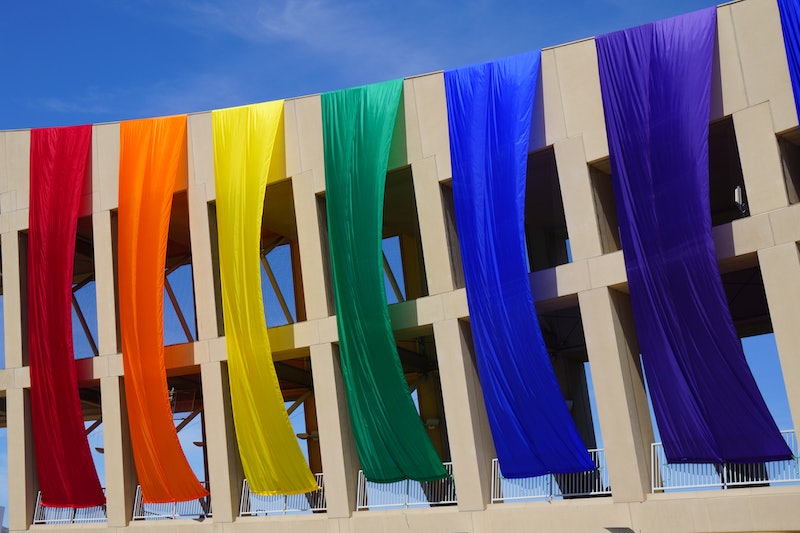 In November 2017, a report from the Utah Department of Health found that from 2011 to 2015, youth suicide in the state increased by 141%. Troy Williams, executive director of the LGBTQ advocacy group Equality Utah, wanted to know what that meant for queer teens in the state. During his research, one factor showed up over and over among young people who experienced suicidal ideation: conversion therapy.

Conversion therapy is the discredited practice seeking to change a person's sexuality or gender identity, but which is linked to adverse mental health effects. In 2018, his organization asked more than 100 people about their experiences with conversion therapy. "The pattern was clear: all of them reported increased depression, difficulty maintaining relationships, and attempted suicide," Williams says. On Jan. 22, Utah became the 19th state to outlaw conversion therapy for minors — and one of the reddest states to do so.

Some on Twitter said they hoped it would push other conservative states to do the same. Vox reported that the ban could be a "tipping point" for LGBTQ rights, noting that Kentucky and Georgia are also considering legislation to ban the practice.

According to Williams, Utah serves as a surprising success story — and potentially a model — for other states because it's so conservative. But it's also unique because around 60% of people in the state and 90% of lawmakers are members of the Church of Jesus Christ of Latter-day Saints, widely known as the Mormon Church.

The church has historically supported conversion therapy, with church leaders even referring members to conversion therapists. But in October 2016, shortly after issuing a new policy against same-sex couples in its membership, the church launched a new website called "Mormon and Gay," where it publicly opposed conversion therapy. (The Advocate noted at the time that the church's stance doesn't change its doctrine, which still states that acting on feelings of same-sex attraction is a "sin.")

Given the church's pivot, Williams thought there could be opportunity for change. This optimism has worked for previous Equality Utah campaigns: In 2015, the state passed a bill banning employment and housing discrimination against LGBTQ people; in 2017, the governor repealed a law prohibiting discussions of homosexuality in public schools; and last April, the state passed an LGBTQ-inclusive hate crime law.

Despite the group's past success, the last two years weren't easy, Williams says. When he approached Republican lawmakers, "they kept saying, 'Well, Troy ... this isn't really happening in the state,'" he recalls.

To counter that, Equality Utah launched a statewide campaign in January 2019 to tell the stories of Utahns who had recently undergone conversion therapy, which "brought these really painful experiences into people's consciousness," Williams says.

Arturo Fuentes, 36, was one of the survivors featured. Over 11 years, Fuentes, a former member of the LDS Church, says he saw between eight and 10 "therapists." After telling his story, he says he received a lot of public support. "I wanted people to see a face to a story," he says, and to show that conversion therapy needs to stop "because there's something wrong about a teenager being so afraid of who he is."

Another contributor was Nathan Dalley, 20, who shared his story directly with lawmakers. During introductory meetings, he would often stick to the data: He'd explain the practice, its negative effects, and who is affected. "A lot of the time, people who supported the practice didn't realize it was something that was harmful [until they spoke to me]," he says.

Meanwhile, Williams also sought out sponsors to introduce the ban in the Utah legislature. The organization had approached Rep. Craig Hall in the fall of 2018 about being a sponsor. Hall, a former bishop and current member of the Church of Jesus Christ of Latter-day Saints, says that he started reading up on the issue. "When you have something that's both ineffective and particularly harmful, that's when you have serious issues with suicidal thoughts and feelings of worthlessness," Hall says. "So [reading research] was particularly helpful in convincing me that this type of therapy should not be allowed."

In February 2019, Hall introduced HB 399. Both conversion therapy survivors and proponents showed up at the state Capitol in Salt Lake City for a tense committee hearing on the bill. "It was a disaster, and it was a really excruciating experience for the survivors," Williams says. Fuentes was supposed to speak, but when he saw one of his "therapists" sitting in the crowd, he broke down. The bill ultimately stalled in the state's legislature in March 2019.

Fuentes says those who testified against the bill were well-intentioned but unaware of the impacts of conversion therapy. "We're all doing what we think is right, and I understand their indoctrination," he says.

How The Ban Was Resurrected

Equality Utah didn't give up. Hall credits their persistence and resolution not to make the ban a partisan issue. In June 2019, Republican Gov. Gary Herbert intervened and directed the Psychologist Licensing Board to draft regulations for conversion therapy in the state, a move Williams characterizes as allowing "science to prevail over politics." In November 2019, after months of meetings with advocates, the LDS Church, and professional psychologists, Herbert directed the Utah Division of Occupational and Professional Licensing to file a new rule banning the practice.

“I have learned much through this process," Herbert said in a statement at the time, according to The Hill. "The stories of youth who have endured these so-called therapies are heart rending, and I’m grateful that we have found a way forward that will ban conversion therapy forever in our state. I’m grateful to the many stakeholders who came to the table in good faith, with never-ending patience.” That rule, which the LDS Church also supported, took effect on Jan. 22.

Williams says survivors' stories were central to passing the ban, but Equality Utah also has something no other conservative state does: the support of an incredibly popular rock band. Since the summer of 2017, Equality Utah has partnered with Imagine Dragons lead singer Dan Reynolds, a member of the LDS Church. Reynolds' LOVELOUD Foundation hosts an annual music festival in different Utah cities that works to foster support of LGBTQ youth, raise awareness about youth suicide, and fundraise for nonprofits. Access to an influential figure like Reynolds — who can uniquely speak to the LDS community — is one element that other conservative states trying to pass pro-LGBTQ legislation might not be able to replicate.

"Dan has created this space that allows active Latter-day Saints to come to a festival with their kids where they don't feel threatened," Williams says. He believes it has created a "seismic shift" in the state when it comes to LGBTQ acceptance.

"I remember standing on stage speaking to 20,000 active Mormons about LGBT rights and having them cheer," Williams says. Utah has seen success with supportive LGBTQ policy, he says, because they've been working simultaneously with the different parties involved. It's a lesson the rest of the country can learn from. "When you live in Utah, you have to actively engage conservatives," he says. "It's sometimes challenging, especially when talking about issues of identity. It's very personal. It takes courage."