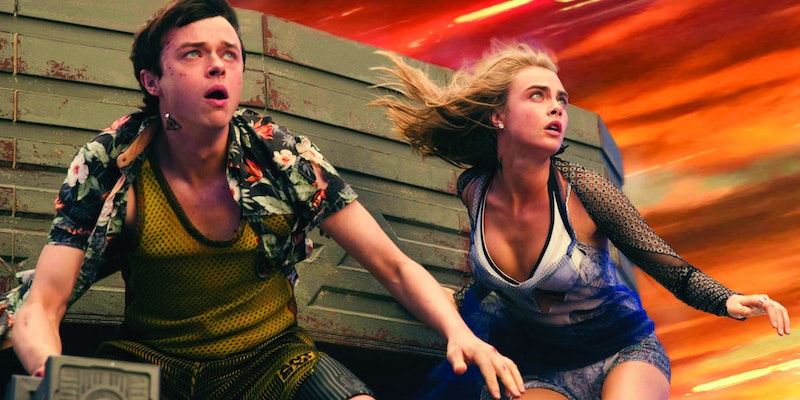 The upcoming outer space epic Valerian and the City of a Thousand Planets, starring Dane Dehaan and Cara Delevingne as intergalactic warriors protecting the human race, is nothing short of entertaining. It's visually stunning, exciting as hell, and features some of the best CGI audiences have seen in years. But unfortunately, Valerian paints a fairly grim look at the future for women. Taking place in the 28th century, the film shows various worlds boasting an array of exciting and beneficial improvements to life as humans know it. There are technological advancements, an array of new alien species, and innovative advancements in almost every field. It's a mostly optimistic look at the (albeit fictional) future of our universe, and yet the film's female lead Laureline (Delevingne) is still fighting the patriarchy at every turn.

It seems like a very pointed decision to allow every other aspect of the universe to evolve, but still present human women facing the same sexism seen in 2017, and apparently that's exactly the point. "A hundred percent,” Delevingne says at the Los Angeles press day for the film. "I really hope that hundreds and hundreds of years in the future it won't be the same, [though] that's very much how it is now."

The misogyny Laureline faces in Valerian is unmistakable. Though she is a special operative assigned to protect the galaxy — not a title or task to be taken lightly — she is underestimated at every turn. Her male superiors are constantly telling her to stay behind, and Valerian, the man who is supposedly in love with her, refuses to acknowledge all the ways she's continually saved his life. It's exhausting to watch Laureline attempt to stick up for herself every time Valerian tells her to "wait here," before he galivants into the galactic sunset.

But Laureline's treatment in space isn't her fault, obviously. In fact, she's a fantastic character — intelligent, determined, empathetic, thoughtful — but she exists in a world, not unlike today, where she continues to battle — and be slowed — by the patriarchy. And part of this is screamingly obvious when it comes to the uniforms she wears. While Valerian dresses in a typical military-style suit and durable shoes, Laurline wears a miniskirt and high-heels. It hardly seems fair, and Delevingne agrees. "On set, all of the women in that moment were all wearing those skirts and, obviously you’re like, ‘Why is this necessary?’" she recalls.

(For the record, Delevingne said that while she didn't complain to her director about the outfit, she definitely would have spoken up if she was asked to do any stunts in her skirt and heels.) Yet the actor and frequent high-fashion model is quick to point out that these outfit choices might be normal for some people. "Some women who I've asked actually prefer to wear heels," she says. "I don’t think everybody has to wear trousers, but should at least be a choice. Men should be allowed to wear heels, too.” Especially several hundred years into the future.

Dehaan, who plays the film's male lead, tells me that he realizes the gender politics shown in the film do not lean in Laureline's favor. He admits that Valerian never gives Laureline any credit, even though the key to his character's success is in large part thanks to his female coworker.

"A really important part of Valerian’s character is that he would be nothing without Laureline," he says, hands folded on a couch during the same Los Angeles press day. "She is what keeps him alive; she’s really what makes their missions successful."

The actor calls upon an old adage to explain it best: "Behind every strong man is an even stronger woman. That’s definitely a theme of Valerian," he says. "I think that’ll probably be true about men and women and in some respect even 700 years from now. Men will still think that they are doing everything — that they’re doing so well — that it’s all them."

Dehaan himself, though, is entirely unlike his intergalactic character. "Cara and I often joked that in real life Cara’s probably more like Valerian and I’m more like Laureline," he says. Having just had his first child, a girl named Bowie, the actor wears his feminism on his sleeve prouder than ever. "I’ve always considered myself a feminist and I’m really excited to have a daughter," he says, beaming. "The biggest influences in my life have been women, whether it’s my mom or my wife. In a lot of ways I was hoping for a girl."

Sadly, the future for women, as Valerian paints it, does not look bright, but luckily, Dehaan and Delevigne have higher hopes for what gender equality will look like in the years to come in real life. It's safe to say this is one film that audiences can be thankful is rooted in fiction.