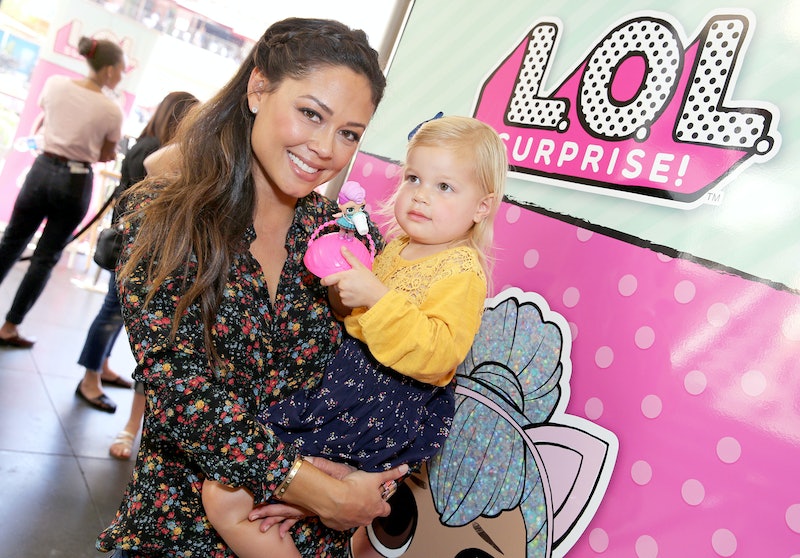 One of the best ways to deal with trolls on social media is to just straight-up ignore them. Another great way? Kill them with kindness and encourage positivity. On Dec. 31, someone on Twitter compared Vanessa and Nick Lachey's daughter to his ex-wife, Jessica Simpson, Us Weekly reported. After Vanessa caught wind of the comparison, she had some words for the commenter — and what she said was totally fair and filled with class.

According to Us Weekly, a fan named Kimberly tweeted and then deleted a comment about Nick and Vanessa's 3-year-old daughter, Brooklyn. "Ok… elephant in the room," she supposedly wrote, "but why does Nick and Vanessa Lachey’s daughter look like Jessica Simpson?"

Wait, what? Sure, they both Brooklyn and Simpson have blonde hair, but the rest of the little girl's features are like, a perfect composite of her two famous parents. That nose, those eyes! Come on, now. She truly doesn't look anything like Nick's ex-wife, but even if she did, what point was that fan trying to make?

Eventually, Vanessa decided to swoop in with a response. Did she angrily blast them in a flurry of expletives? Nope. Provide them with DNA evidence of Brooklyn's genes? Nah. Did she even unleash a barrage of exclamation points? She did not. Not a single one, actually. So, what did she do? Vanessa decided to take the high road. She tweeted,

Wow, right? So cool, calm, and collected. So succinct and straightforward. She started succeeding in one of her 2019 resolutions before 2018 was even officially over.

As a quick recap, Vanessa and Nick tied the knot in July 2011, five years after Nick and Simpson called it quits. In addition to Brooklyn, the couple has two sons as well: Camden, 6, and Phoenix, 2.

"We feel very complete," Vanessa told People about the possibility of having a fourth child back in Jan. 2018. "But that being said … we just love children and we love having a big family."

She continued to explain,

"We’re both content, but if for some crazy reason it were to happen, we wouldn’t be devastated. It would be like, 'All right, here we go again.' We are very content and happy with three. It’s just enough. It’s a little bit of a zone defense — we’re not man-to-man anymore, as [Nick] puts it, but just enough to where we can still interact."

When Vanessa joked to People that "by four, I can imagine it’s chaos," her husband totally agreed. "And then we’re probably forgetting one of them," Vanessa added. "We’d be like, 'Where’s Phoenix? Who put the baby down?'"

Vanessa and Nick clearly both have a good sense of humor about how wild life with kids can be. Parenting takes a lot of patience — just like dealing with trolls on social media. People should never come after celebrities' kids, but if and when they do, Vanessa's response to that one fan's tweet is a shining example of how to handle them with class.