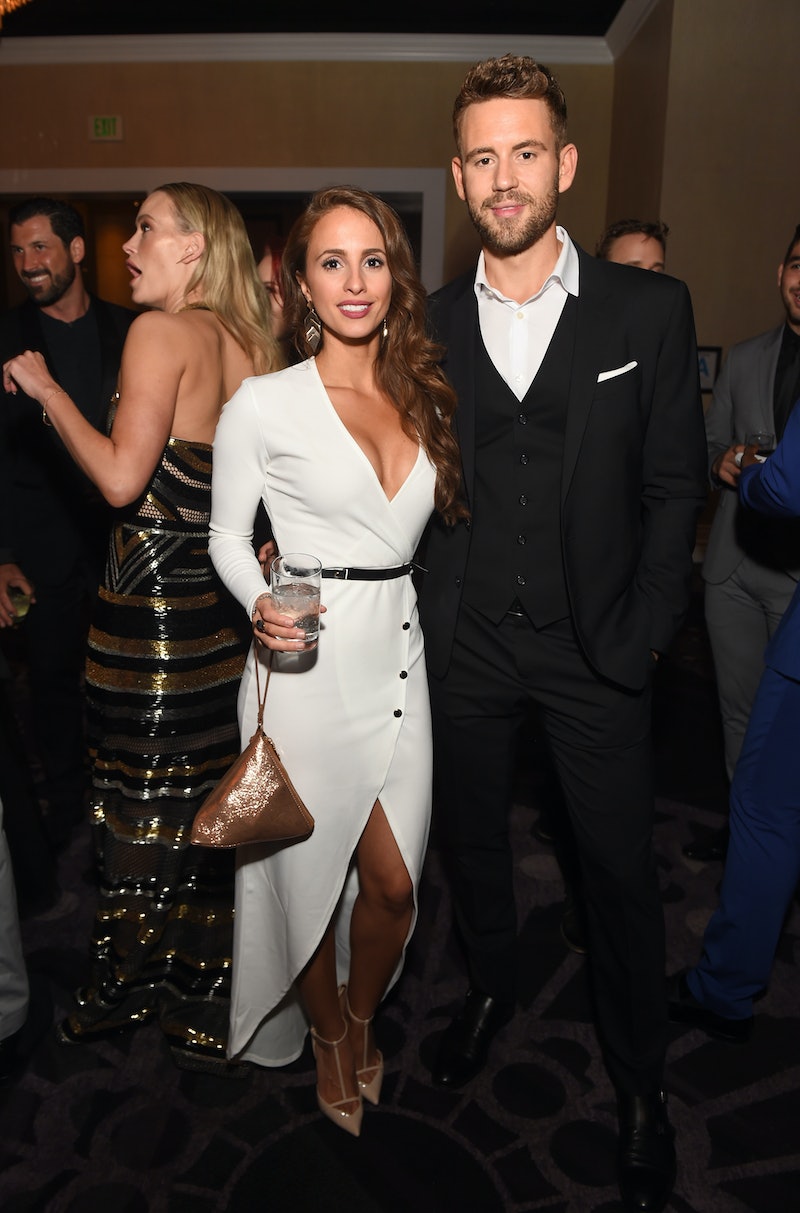 With a few rare exceptions, most Bachelor seasons end with the star getting down on one knee and proposing to the woman he wants to receive that final rose. But as heartwarming as those moments may come across on-screen, there's so much going on behind the scenes that fans are rarely aware of — like the fact that Vanessa Grimaldi and Nick Viall's Bachelor engagement almost didn't happen, despite how pleased the duo looked during the finale. Talk about a shocking piece of intel.

During the Oct. 22, episode of the podcast "Let's Talk About It With Taylor Nolan," as reported by Us Weekly, Vanessa confessed that she didn't want to get engaged at the end of Nick's season since she didn't think the two of them were quite ready to take such a huge next step in their relationship. “I didn’t want to get engaged. They didn’t air this,” Vanessa explained to Taylor Nolan on the podcast. “I had a conversation with him, and I said, ‘Listen, wouldn’t it be better if we just date outside of the show and then get engaged? ‘Cause that’d be more meaningful. We’d get to know each other.’”

But ultimately that wasn't the way things ended up playing out for the duo. Despite Vanessa's initial hesitation to have Nick put a ring on her finger, she admitted during the podcast that she was glad Nick had convinced her to agree to the proposal and believes their relationship actually lasted longer because of it.

“He brought up something really important, and I think if we weren’t engaged, we would’ve broken up sooner,” she stated, while adding that his reasoning was that the engagement would serve as a form of commitment that could help get them through all the media attention after the show. "It’s going to hold us together," she recalled Nick telling her. "It’s going to hold us together more than it’s true. ‘Cause you have, like, something you’re working towards, right?’"

Nick's proposal aired in March of 2017 during the Season 21 finale. They announced their breakup several months later, in August.

This isn't the first time Vanessa has spoken candidly about her relationship with Nick. Back in September 2017, shortly after the news of their split was made public, Vanessa opened up about the break up and what exactly led to them deciding to call it quits during an interview with People. “In the end, as much as we loved each other and tried to make it work, we just realized we were different people fighting to keep a relationship when ultimately we just weren’t’ the best fit for each other," Vanessa said at the time.

But just because it didn't work out with Nick, doesn't mean Vanessa has written love off completely. Quite the opposite, actually. She is currently dating businessman Josh Wolfe and has apparently been sending him pictures of engagement rings as of late. It may not be the love story she originally expected, but that's part of the beauty of shows like The Bachelor. You never quite know how these stories will play out.