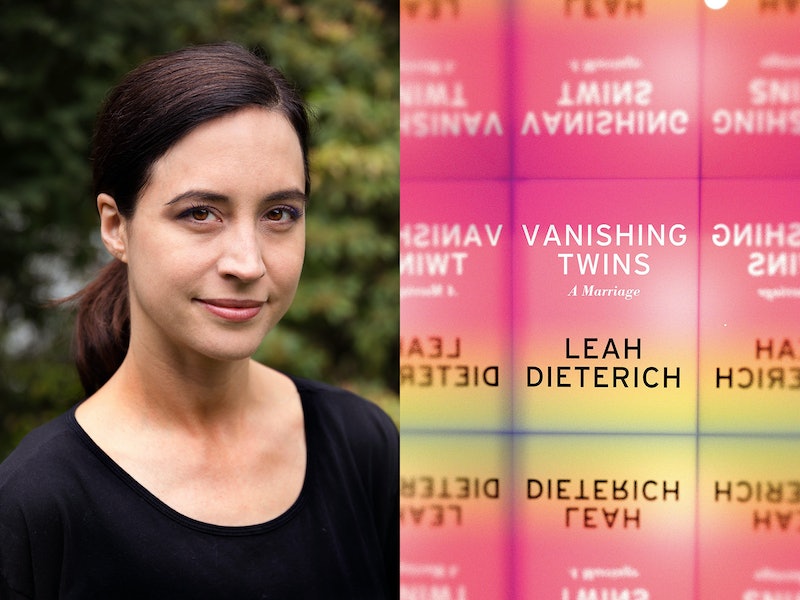 It was 2013, and author Leah Dieterich was trying to write a feature film. In it, a young husband and wife were exploring non-monogamy as a way to find themselves outside their marriage. The wife wanted to date women. The man was less interested in other women, but he dated them to keep pace with his wife. Unbeknownst to them, they ended up dating the same woman — or so they thought. As it turned out, they were dating identical twins.

“I began researching twins more broadly and came across the concept of Vanishing Twin Syndrome,” Dieterich tells Bustle, referring to the phenomenon by which a fetus from a multiple pregnancy dies in the womb and is reabsorbed by its sibling. She felt a strange sense of recognition. “I saw that it could explain the way I had been doing intimacy for so much of my life,” she says. She interviewed sets of twins to flesh out her characters, but soon realized she was more interested in writing about her own life than in finishing her screenplay. Her resulting memoir, Vanishing Twins, published in September by Soft Skull Press, explores a broad range of subjects: identity, sexuality, polyamory, partnership, attraction, ballet, each through the lens of twinship. “Twins were an early organizing principle that I used as a lens to view all of my relationship histories,” says Dieterich.

“I saw that it could explain the way I had been doing intimacy for so much of my life,” she says

A classically trained ballerina, the practice of partnership was foundational to the way she conceived of both love and creative collaboration. She researched plot lines of classical ballets, querying how they had informed her ways of thinking about romantic love and femininity, in the same way she had previously looked to books and films for answers. Her book is a dance, moving adroitly through brief, philosophical, and thought-provoking fragments, as in Roland Barthes’s classic A Lover’s Discourse, a book through which the composite image of the “lover” gradually emerges in brief “figures,” or descriptions of his gestures in the world.

The story of Dieterich’s marriage comes into focus in a similar way. At first it’s exactly the kind of partnership she’s been seeking: The two of them appear to mirror each other in seemingly cosmically ordained ways. But they are also young, and crave the kind of life experiences that will reveal who they are: He wants to spend a year in residency at the Whitney Museum; she wants to explore her queer identity in relationships with others. These experiences feel like forms of separation, but they remind themselves that there is no such thing as intimacy without separation. Their hope is that, in finding themselves, they will be able to draw closer to each other.

Dieterich maintains a long-distance romance with a female filmmaker and a working partnership with a queer man at her creative agency, though the differences between the two blur in intriguing ways. “Desire definitely stokes creativity,” she tells Bustle.

Their hope is that, in finding themselves, they will be able to draw closer to each other.

Romantic and creative impulses can overlap and be difficult to separate. A theme of her book is the way people perform their identity for those around them and the way she performs her identity for those around her: She cuts her hair into a boyish style like the one worn by her Spanish girlfriend; she writes a novel for her girlfriend on cigarette papers, and maintains daily, image-heavy conversations with her via text and Gchat; all the while, she does the same with her husband while he’s in New York and she is in California. “While I was carrying on two romantic relationships, I felt very inspired by all the desire I was allowing myself to feel and to follow,” she says. “At the same time, I felt spent even though I hadn’t ‘done anything with it’ creatively.”

In order to complete a project, she had to close her marriage and funnel all of her desire — “both the desire I’d been able to express and explore, as well as the desires that felt thwarted by monogamy” — into the writing of Vanishing Twins. “Writing the book felt creative in a way that didn’t also make me feel divided or depleted,” she says. “Somehow all my desires, both romantic and sexual, as well as ambitions for my career and professional identity found their way into it.”

"While I was carrying on two romantic relationships, I felt very inspired by all the desire I was allowing myself to feel and to follow,” she says. “At the same time, I felt spent even though I hadn’t ‘done anything with it’ creatively.”

Vanishing Twins comes at a time when more Americans than ever are exploring what it means to move beyond the nuclear pair-bond. A 2016 study found that one in five people had experimented with consensual non-monogamy in their lifetime, while another study from the same year found that the number of Google searches about consensual non-monogamy had increased significantly over the last decade. Dieterich’s book explores this cultural shift on the micro level, delving into private moments she’s shared with others which have brought about subtle transformations in her self-perception. Bonds with different “twins” manifest in important and distinct areas of her identity — her relationship with the Spanish filmmaker is an essential expression of her queerness, which may otherwise be invisible to the outside world.

“My hope was that in the end I could use the book itself as my mirror, my literal fetus papyraceus (the flattened, paper-like vanished twin), instead of continuing to impose that on my relationships,” she says.

She shared the manuscript with each of her subjects. Talking about it with her husband proved most challenging. “He had vivid memories from this time period and felt like I had left huge gaps,” she says. Their relationship was monogamous at the time of his reading, but Dieterich felt she needed more distance from their non-monogamous period in order to be able to write about it. She spent a year revising the book, pulling from written correspondences with her husband, which they had sent while they were living on opposite coasts. She focused on giving his character more shape and voice. “I made it a kind of penance to not only read through every line of these dialogs but to transcribe them,” she says. “Having to type each word allowed me to inhabit both of our characters as we they were at that point in time. It was painful, but it showed me how hard we tried with words to make our relationship work.”

Two years ago, they had their first child. I asked Dieterich how the intensity of motherhood interacts with her creative drive. She quoted Sarah Manguso’s Ongoingness: “I used to exist against the continuity of time. Then I became the baby’s continuity, a background of ongoing time for him to live against… I am no longer merely a thing living in the world; I am a world.”

“Having to type each word allowed me to inhabit both of our characters as we they were at that point in time. It was painful, but it showed me how hard we tried with words to make our relationship work.”

“I love this leap from background to world,” Dieterich says. Before she was a mother, she would have seen this role as ‘background’ like an uncredited extra in a movie. “One of a sea of others,” she says. Vanishing Twins begins with this concern. “During my ballerina years, I danced mainly in the corps de ballet. This is the term for the group of dancers who are not soloists. The literal translation is the body of the ballet, and as such, all the dancers in the corps move together, like synchronized swimmers. They are one body. But not even a body. They are a backdrop for the principal dancers. Just scenery.”

“Now that I’m a mother, I don’t worry about being scenery,” she says. “I know that I am a world. And I’ve realized in recent years, even before becoming a mother, that I will always contain various selves that have ability to diverge and coalesce.”

I ask her whether she thinks of her identity as a fragmented or as a unified entity. Writing a book has helped her find a sense of unity, she says. “I hope that writing can continue to be the way I can express my various selves. I can be in more than one movie in my life. I can be the story in one and the music in another. Motherhood has not decreased my creative drive," she says. "If anything, my creative drive has increased since having a child, in the way it always seems to do when I fall in love.”